Why faces might not be as attention-grabbing as we think

Research combining wearable eye-tracking technology and AI body detection software suggests our eyes aren’t drawn to the faces of passers-by as much as previously thought. 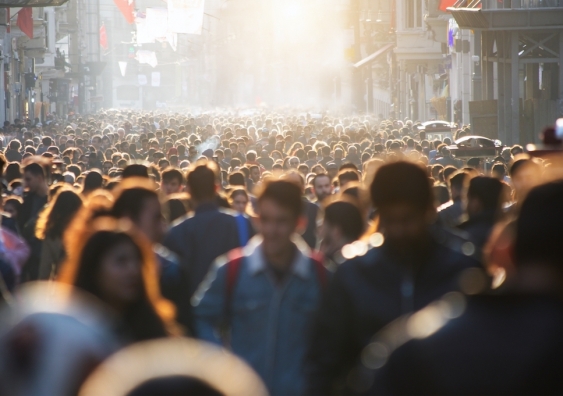 Faces are key to everyday social interaction. Just a brief glance can give us important signals about someone’s emotional state, intentions and identity that helps us to navigate our social world.

But researchers studying social attention – how we notice and process the actions and behaviours of others in social contexts – have been mostly limited to lab-based studies where participants view social scenes on computer screens. Now, researchers from the School of Psychology at UNSW Science have developed a new approach that could enable more studies of social attention in natural settings.

The novel method correlates eye-movement data from wearable eye-tracking glasses with analysis from an automatic face and body detection algorithm to record when and where participants looked when fixating on other people. The methodology, detailed in the journal Scientific Reports, could have a range of future applications in settings from clinical research to sports science.

“Studies of social attention to date are almost entirely based on people viewing images or videos containing other people on computer screens. Surprisingly, little is known about how people direct their attention towards others in unconstrained natural settings,” says Associate Professor David White, an author of the study and lead investigator in the Face Research Lab at UNSW Sydney. “This new method will help us to understand social attention beyond the lab environment and how it unfolds ‘in the wild’, with millisecond precision.”

While the advance is mainly methodological, the study’s findings suggest our eyes aren’t necessarily drawn to the faces of others walking by – at least not as much as previously thought. Data from the study’s 30 participants revealed they looked at the faces of just 16 per cent of the people they walked past in a 20-minute circular route while wearing the mobile eye-tracking device.

“There were also significant differences between individuals in their social orientation, with some individuals looking at almost everyone they passed and others not at all,” A/Prof. White says. “The reasons for these individual differences are unknown but prior work where participants viewed social scenes on computer screens suggest that these differences are related to people’s genetics.” 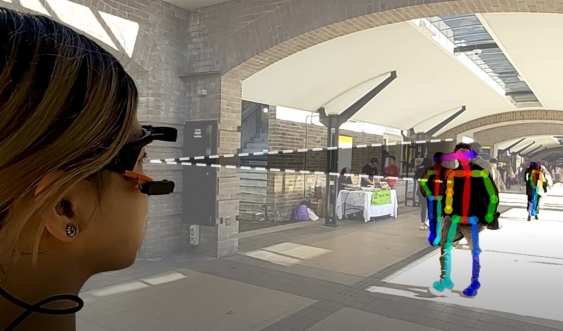 Wearable eye-tracking and AI body detection technology used by the researchers to record when participant’s looked at passers-by, and where they looked. Image: Victor Perrone De Lima Varela.

Looking at faces in the wild

Previous studies, which have examined people’s eye movements as they view images of people presented in lab-based research, show faces catch our attention more than non-face objects. This has led to the view that faces automatically attract our attention. However, just viewing social settings on a screen doesn’t necessarily reflect the dynamic of social experiences in the world.

The study also found participants were more likely to fixate on people when their faces were in full view. But contrary to existing evidence, faces held focus no more than other body regions such as legs.

Read more: Who's Australia's best super-recogniser? This test could help us find them

To gauge the possibility of bias, participants were asked questions during the debriefing to understand their awareness of the study’s purpose. Only four participants mentioned attention to people or person perception as a potential research focus.

“The participants were naive to the aims of the study, which is particularly important in research like this where we don’t want to bias them towards looking at specific things in their surroundings,” A/Prof. White says.

The research team are planning a follow-up study with a larger sample size to see if the findings generalise to a broader population.

“We want to use this new method to see whether the individual differences we found in this study replicate on a larger scale and if they are associated with other aspects of social cognition, such as a person’s level of social anxiety,” A/Prof. White says.