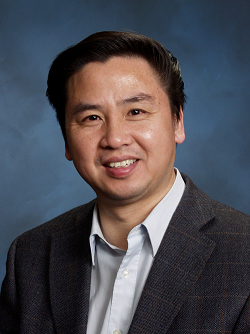 Professor Liming Dai is a UNSW Scientia Professor and an ARC Laureate Fellow. He is also Funding Director of the Centre for Advanced Carbon Materials at UNSW. Previously, he was a Principal Research Scientist in CSIRO at Clayton (1992-2002), an Associate Professor of Polymer Engineering at the University of Akron (2002-2004), the Wright Brothers Institute Endowed Chair Professor of Nanomaterials at the University of Dayton (2004-2009), and the Kent Hale Smith Professor in the Department of Macromolecular Science and Engineering at Case Western Reserve University (2009-2019).

Professor Dai’s expertise covers the synthesis, functionalization, and device fabrication of conjugated polymers and carbon nanomaterials for energy-related and biomedical applications. Among his many pioneering scientific achievements, he is widely recognised as a pioneer and leading scientist in the research and development of carbon-based metal-free electrocatalysts for renewable energy technologies. He has published more than 500 journal publications with citations over 83,000 and an h-index of 146 (as of Aug 2020, Google Scholar). He has also published a researchonograph on intelligent macromolecules and 5 edited/co-edited books on carbon nanomaterials for advanced energy systems and biomedical applications, including 2-volume edited book on Carbon-based Metal-free Catalysts by Wiley-VCH. He is a Clarivate Analytics World’s Highly Cited Researcher (both in Materials and Chemistry). He serves as an Associate Editor of Nano Energy and editorial board member of more than 10 international journals.