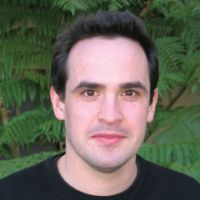 I collaborate closely with colleagues at a wide range of national and international institutions, enabling a strong multi-disciplinary approach.

I am particularly interested in the scientific basis for biological conservation through managing environmental problems and I advise the United Nations, European Union and governments (Australia, U.K., U.S.A.) on this.

I have lectured (>120 contact-hours), prepared teaching materials, supervised post- and under-graduate students, and I have secured >$1.245M in research funding.

Over the last 11 years, I have shown shores in Oceania, Asia, Africa, Europe, and North and South America are contaminated with microplastic (plastic debris < 1 mm), with more material in densely populated areas.
The source is probably sewage contaminated by synthetic fibres from washing clothes. I have shown that washing a single garment add >1900 fibres to wastewater and using facial scrubbers can add millions of granules of microplastic to wastewater. In estuarine habitats my work demonstrated that the quantity of microplastics can be nearly twice that of larger plastic debris, yet it is a contaminant that has been largely ignored. I have also shown that habitats down-wind accumulate greater quantities of microplastic.

My work has shown for the first time that ingested microplastics accumulate in the gut of filter-feeding invertebrates (mussels) and can translocate into the circulatory system and haemocytes where they persisted for months. Further novel work with polychaete worms showed that ingesting microplastic transfers pollutants and additives into tissues compromising ecophysiological functions that sustain health and biodiversity. I have recently outlined the mechanisms by which debris impacts ecosystems by linking effects at multiple levels of organization (subcellular to ecosystem) and developing new frameworks to assess the ecological risks (e.g. quality of water, biogeochemical cycling, decomposition, maintenance of biodiversity, production of uncontaminated food) due to marine debris. Through this I have showed that policy about plastic debris is scientifically outdated and, if countries classified the most harmful plastics as hazardous, their environmental agencies could conserve greater levels of biodiversity by having the power to restore affected habitats and prevent more dangerous debris from accumulating.

To combat the problems of debris, I developed the Benign by Design programme (http://www.launch.org/innovators/mark-browne) which works with industry and government to determine how to reduce emissions of toxic debris from consumer products (e.g. clothing, packaging, exfoliants).

I have shown that run-off from boat-yards can add large sources of copper to coastal habitats. Methods I developed to measure how copper affects invertebrates revealed that grazing limpets are more sensitive to copper than are filter-feeding mussels and predatory crabs. To make accurate predictions about the consequences of interactions between pollution and climatic change, I pioneered field-based techniques to manipulate copper and pesticides in marine habitats. Building on earlier work using blocks of plaster, I developed a field-laboratory at a marina with a programmable system of irrigation, which allowed me to control the delivery of contaminants to experimental plots within habitats. This allowed me to expose natural assemblages to complex regimes of chemical disturbance predicted under scenarios of climatic change through urban and agricultural run-off. A key finding from my experimental work was that metals and pesticides reduce the tenacity of limpets (i.e. how well they stick onto a surface).

Through my work investigating the tenacity of limpets, I developed a portable apparatus (Tenaciometer) to measure their force of detachment (parallel and perpendicular) to the substratum) and a staining technique to estimate in situ, the size of the attached area of foot. These techniques were then used to determine how the performance of limpets is influenced by natural (predatory birds, exposure to waves, height and slope of shore) and anthropogenic stressors (metals, biocides, modification of habitats).

Projects Clothes, fibres and filters that reduce pollution by micro and nano debris

This project provides scientifically verified methods to avoid, intercept and redesign products that cause the most abundant of type of marine plastic pollution – clothing fibres - which has increased by over 450% in 60 yr. While the use of natural fibres, instead of plastic, and washing-machine filters are marketed as ecological products that mitigate fibre pollution, scientific evidence is lacking.

The project aims to determine how natural and plastic fibres, clothing-brands and washing-machine filters alter fibre emissions and ecological impacts. The outcomes will underpin efforts by the public, government and companies to reduce fibre pollution by producing protocols that are anticipated to be incorporated into products to reduce the environmental release of microplastics.

This project is Part of the Benign By Design Programme and is funded by the Australian Research Council and involves the University of New South Wales (Emma Johnston, Marina Todesco, Phil Crump, Charlotte Beloe), University of Sydney (Peter Lay, Elizabeth Carter), Parley for the Oceans (Mike Long), Melbourne Water (Catherine Rees) and South Australia Water Corporation (Milena Fernandes) and is also supported by the NSW EPA.

As a Research Assistant (with Michael Depledge, Tamara Galloway & Malcolm Jones), I developed assays to measure the ‘health” of organisms, testing the sensitivity of species to contaminants and applying these measures in marine and freshwater habitats across Europe.

Ecological, physiological and toxicological skills developed during this time led to my Ph.D. (supervised by Richard Thompson & Tamara Galloway), unraveling the environmental and biological consequences of microplastic.  Through this I was invited to a EICC Post-doctoral Fellowship in Australia (with Tony Underwood, Gee Chapman & Ross Coleman) investigating the ecological impacts of urbanization, climatic change and microplastic.

Skills I developed in experimental design, statistics, quantitative ecology and conservation developed my interest in the ecological basis by which habitats can be sustainably managed.  To pursue this I secured an IRCSET Post-doctoral Fellowship in Ireland (with Tasman Crowe), testing the ecological relevance of biomarkers in predicting the impacts of pollution on the structure and functioning of marine ecosystems.

This led to an invitation to a NCEAS Post-doctoral Fellowship in the US to assemble and co-lead a working group investigating the sources, fate, risks and impacts of debris in marine habitats (with Steve Gaines and Kara Lavender Law).

Invitations to review manuscripts for journals