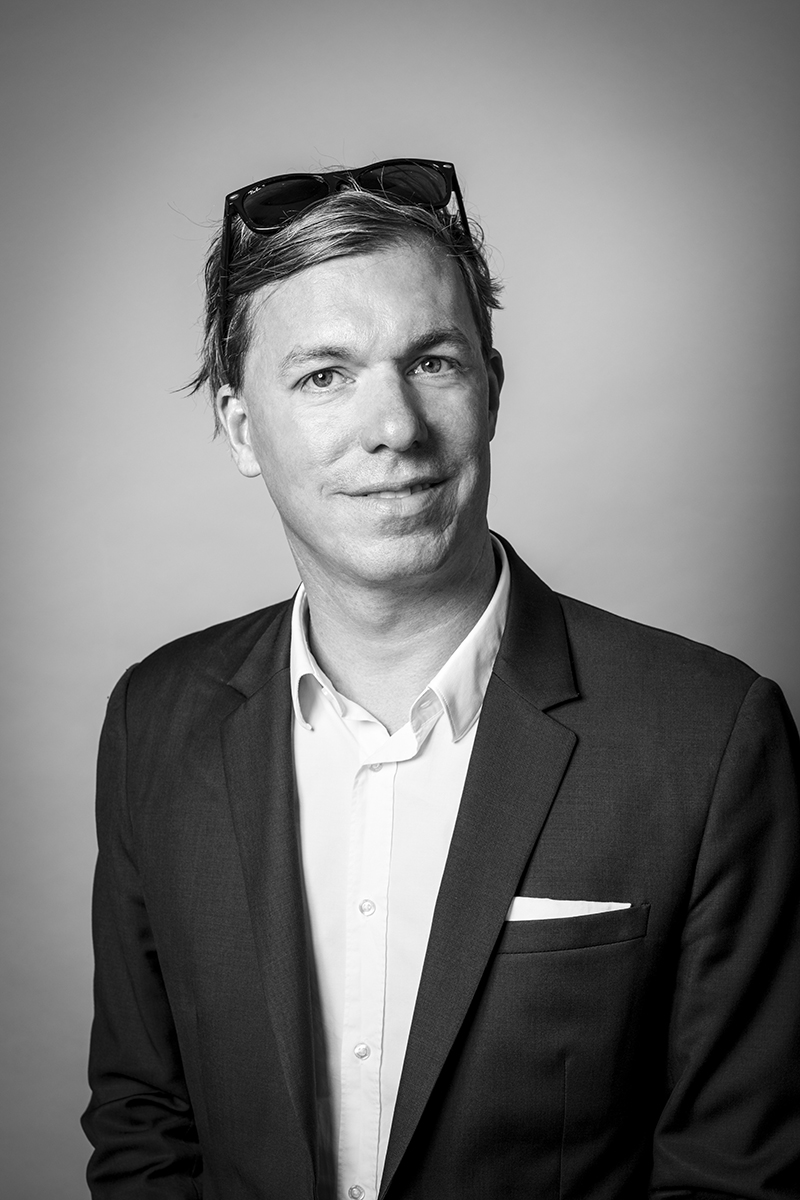 Associate Professor M. Hank Haeusler Dipl.-Ing. (Fh) / PhD (SIAL/RMIT) is the Discipline Director of the Bachelor of Computational Design (CoDe) at the Australian School of Architecture + Design (Built Environment) at the University of NSW, Sydney. Since December 2017 Haeusler is also a Professor at the Visual Art Innovation Institute at Central Academy of Fine Arts, Beijing due to being internationally recognised as a researcher, educator, entrepreneur, and designer in media architecture, digital technology, computational design, interaction design, and ubiquitous computing.

Under Haeusler’s leadership, the CoDe degree was developed as a nexus of architecture and design with engineering and science all through a profound understanding of computing and computation. The program focuses on applying state of the art thinking in design, architecture and urbanism, engineering and science, together with frontier computational skills and digital fabrication technologies. Commencing in 2015, and unique in Australia, the degree focuses on the design and application of digital technologies for and within the built and urban environment, to address and meet the challenges of the 21st century.

The core focus in Haeusler’s research at UNSW is studying the integration of digital technologies within and for the built environment. The motivation for this interest is based on the belief that fine-grain data collected in real-time, can provide crucial information about the performance of the built and urban environment, and subsequently enable enhanced knowledge for the design of cities. He is author of seven books and over 50 book chapters, journal and conference papers discussing significant topics such as responsive public transport systems ‘InterChanging – Future Designs for Responsive Transport Environments’ (Spurbuch, 2014) and ‘Infostructure – A transport research project’ (Freerange Press 2010); media architecture and the role of the Internet of Things for the built environment in publications such as: ‘New Media Façade – A Global Survey’ (avedition, 2012), ‘Media Facades – History, Technology, Content’ (avedition, 2009); and data visualisation and info aesthetics in ‘Chromatophoric Architecture – Designing for 3D media facades’ (Jovis, 2010).

From 2012 Haeusler has led a competitive ARC Linkage Grant investigating how to relieve growing patronage pressure on Australian public transport by integrating user-responsive digital technologies to offer a complementary approach to infrastructure expansion. This project investigates low-cost approaches to transport infrastructure expansion through the use of digital information technologies that work in conjunction with existing hard infrastructures. This aims to improve passenger flow through facilities by distributing loads across services through new approaches to information delivery and access for passengers. The vision is to enhance the customer experience while increasing mode-share and revenue performance of public transport, reducing operating costs, energy use and service disruption during periods of upgrade and refurbishment.

As a board member of the Media Architecture Institute Vienna / Sydney and in the role of director of the institute from 2011 – 2014, Haeusler has organised media architecture summits in Europe and Asia (Media Façade Summit Frankfurt, 2012 and 2014; Media Façade Summit Hong Kong, 2013). Additionally he was on the curatorial board as industry chair and special advisor of the Media Architecture Biennale 2012 and 2014 in Aarhus, Denmark. He was the General Chair of the 2016 Media Architecture Biennale in Sydney. The Biennale attracted over 500 global visitors, with a total budget of A$130k and is considered a significant event in the media architecture research community. Prior to his UNSW appointment Haeusler held a Chancellor’s Postdoctoral Research Fellowship at the UTS, Sydney. He completed his PhD thesis ‘Spatial Dynamic Media Systems’ (VDM publishers, 2010) at SIAL/RMIT University, Melbourne supervised by Professor Mark Burry in October 2007 and was awarded the RMIT University Research Prize in recognition of excellence in a Higher Degree by Research Program assessed in 2008. Haeusler has studied architecture in Stuttgart, Tokyo and Delft and worked for several years as a practicing architect in Germany, Australia and the US in housing and high-rise office developments. In 2002 – 03 Haeusler designed and project managed two exhibition booths for Mercedes-Benz in Switzerland (Automobile Salon Geneva 2003) with 1500 square meter and Mercedes-Benz largest booth in China up to this point (Auto China 2003) with 3500 square meter.

Haeusler’s has major research achievements in Media Architecture, Responsive Environments, Smart and Ubiquitous Cities and Responsive Transport Environments. In his six years as academic, as part of his postdoctoral work and research as Lecturer at UTS and Senior Lecturer at UNSW, his research was centered on three discrete fields of knowledge that have been developed out of observations and involvement in academia and industry based research projects. These three knowledge domains are:

Within these domains his research is applied in two main fields – first, responsive environments with media architecture and media facades in the center of the domain and second, smart and ubiquitous cities with embedding digital technologies into the built environment. Both fields are researched, tested, evaluated and discussed in the context of public transport to make it responsive transport. In the following the three knowledge domains are further discussed and research and publications in the domains listed.

Media Architecture is the foundation of Haeusler’s research, a unique field in which he had major contributions in establishing the field by publishing the first academic publication ‘Media Facades – History, Technology, Content’ (avedition, 2009) that has been sold over 1700 times and is cited 56 times. Haeusler was also involved in establishing the Media Architecture Institute, first as a speaker and presenter in early summits and conferences in London 2007, Berlin 2008, Vienna 2010 and since 2011 board member and from 2012 to 2014 President of the organisation. The second book on media facades ‘New Media Facades – A Global Survey’ (avedition, 2012) is as well part of establishing foundation knowledge. He expanded the field further through conceptualising new forms as discussed in ‘Chromatophoric Architecture’ (Jovis, 2010). Lastly, his research during his employment at UNSW included several creative outputs where Haeusler tested under a design research methodology various forms of non-standard or complex curved screens, which have been presented to the public via exhibitions in Sydney, Frankfurt (Germany), and Aarhus (Denmark).

Knowledge domain (II) Augmenting Media Facades through embedding digital technology (ICT technology) into a buildings façade. The second main domain responsive environments and smart and ubiquitous cities have its roots in media architecture. Media architecture till the later 2000s was primarily a giant screen on a building facade. Here researchers and designers been occupied with enabling large screens on buildings and studying their impact onto architecture and urban design. With the rise of the smart phone and the cheap availability of sensors and open source programming language the notion of a media façade being just a screen changed to an understanding of a building being equal to a smart phone. Consequently Haeusler’s research shifted to embedding not only LEDs into a build skin but also sensors and transforming media facades into a hubs that could collect data as well as display information. In the following his work has been centred two discrete questions:

The development of the ‘Polymedia Pixel’ was the centrepiece of generating an autonomous sensing and communicating system. The work was discussed in three conference papers and the book chapter ‘Autonomous Pixel’ (2009), From 2011 onwards the research here shifted from investigating a purely technical domain towards initialising a thinking and theory to define the field and to further knowledge. This has been communicated via the book chapter Media Facades – Quo Vadis? (2012) as well as two journal articles.

Knowledge domain (II) Testing the effect of (I, II) on the case study of public transport. As mentioned earlier both domains are researched, tested, evaluated and discussed in the context of public transport. This is reflected in Haeusler’s publications where seven publications since his employment at UNSW are focused on ‘responsive transport’ The main argument the research makes is that is either expensive, politically difficult or time consuming to building new train lines, bus routes or similar. Research has argued that public transport systems can be as well be improved through better transport passenger information. This is where Haeusler’s research tackles the problem. Passenger information can be provided via retrofitting systems with sensors, screens, computing components and ICT technologies that collect data within the public transport system, use the data to generate information about the system and feed them back to passengers via personal screens (smart phones) or public screens (media facades) to create better knowledge to make informed travel decisions. The findings of this investigation where communicated via the book ‘Infostructure – A transport research project’, (Freerange Press, 2012) and an edited book ‘Interchanging – Future Scenarios for Responsive Transport Infrastructure Design’ (Spurbuch, 2014) as well as four conference papers.

The main question now is understand how to enable a system where a loop between gaining information and displaying information could be automated to a point where the system could self generate content.

Haeusler is working, in a teaching context, on the develop a new Bachelor degree that will be the nexus of architecture and design with engineering and science all through a profound understanding of computing and computation. Computers have infiltrated all aspects of the built environment. Thus the course focuses on applying state of the art thinking in design, architecture and urbanism with theories from engineering and science together with frontier computer skills and digital fabrication technologies. The resulting creative, technical and aesthetic solutions are taught in individual interlinked modules. The degree offers unique skills on the application of digital technologies in the built environment to face the challenges of the 21st century.

Research and teaching is always very close connected for Haeusler and student projects like the Hypersurface Architecture [Redux] studio was later realised as an installation for the Sydney Architecture Festival 2012.

Haeusler will also assure that student work get the maximum exposure to the public. He recently curated with Master of Architecture students the Esemplastic exhibition, a research project on George Street Sydney which had been the exhibition of the opening event of the 2013 Sydney Architecture Festival.