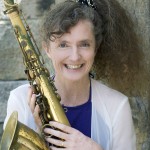 Sandy is a saxophonist, composer, educator and music researcher with a passion for improvisation and new music.

She has played with and written for some of the most important groups in Australian jazz since the early 1980s, toured extensively in Australia, Europe, Canada and Asia, and been featured on over 40 albums. She leads the Sandy Evans Trio and Sextet, and co-leads Clarion Fracture Zone and GEST8. She is a member of Mara!, The catholics, the Australian Art Orchestra (AAO), Ten Part Invention, austraLYSIS, Friends of Kim Sanders, Atma Blu, Waratah, Andrew Robson’s Tallis project, Ben Walsh’s Orkestra of the Underground and SNAP. Sandy recently led her own group at the Edinburgh Jazz and Blues Festival, toured Europe with Mara!, was a featured soloist in Lloyd Swanton’s widely acclaimed Ambon project, and performed with Alon Ilsar.

Sandy has an extensive composition portfolio and has received many commissions from leading jazz, improvising and new music ensembles. Recent commissions include a suite in honour of legendary Australian saxophonist the late Bernie McGann, and a suite Rockpool Mirror based on photographs by Tall Poppies’ Belinda Webster. Wesleyan University Press released Sandy’s composition Testimony, a major work about the life and music of Charlie Parker with poetry by the Pulitzer Prize winning American poet Yusef Komunyakaa, in the US in 2013. Sandy composed Kali and The Time of Change, the title track of The Sirens debut CD.

Her CD Cosmic Waves, featuring South Indian mridangam virtuoso Guru Kaaraikkudi Mani and Sruthi Laya, is released in India on Underscore Records. She began collaborating with Aneesh Pradhan and Shubha Mudgal during a Churchill Fellowship visit to India in 2014 and is currently co-composing ‘Bridge of Dreams’ with them for Sirens Big Band.

She has played with and written for Great White Noise, The Bruce Cale Orchestra, the KMA Orchestra, Kristen Cornwell Quintet, the Bernie McGann Trio, Judy Bailey, the Gai Bryant Quartet and Jeremy Sawkins. Her group Women and Children First was a ground-breaking ensemble during the 1980s, undertaking an epic seven month tour by bus around the whole of Australia. While living in Scotland in 1987, she played with the saxophone quartet SAXTC and the rhythm and blues band Tam White and The Dexters.

She has toured extensively in Australia, Europe, Canada and Asia. Some highlights have been the Chicago Jazz festival, the North Sea Jazz Festival, WOMAD, the Brecon Festival, the Outside In festival, the Edinburgh Festival, Montreal and Vancouver Jazz festivals, the Knitting Factory (NY) the Wangaratta Jazz Festival, the Manly Jazz Festival, Sydney and Melbourne Jazz Festivals, the Brisbane Biennial, the Adelaide Festival, Jazz Yatra (India), the Sidmouth Folk Festival and the Huddersfield Contemporary Music Festival. She has toured Russia, China, Estonia, Lithuania, Denmark, Holland, Italy, Germany, Finland, Singapore, Taiwan, India, Fiji, Western Samoa, Thailand, Indonesia, South Korea and Hong Kong. She has been featured in several television programs for the ABC and Scottish television as well as radio broadcasts on the ABC, BBC and WDR (Germany). She appears in the Australian jazz documentaries 'Beyond el Rocco' and 'Dr Jazz'.

The following books have references to Sandy Evans’ work:

Clare, John. Bodgie Dada and the Cult of Cool: Jazz in Australia since the 1940s. Sydney: University of New South Wales Press. 1995.

Sharpe, John. I Wanted to Be a Jazz Musician. Canberra: National Film and Sound Archive. 2008.

For the Australian Art Orchestra

A Soft Touch For Strings

For The Sandy Evans Trio

For the Sandy Evans Sextet

For Clarion Fracture Zone with the Martenitsa Choir

For Bulgarian Women’s Choir and MARA!

An Indian in Paris

Drums Across the Ganges

For The String Contingent

For The Seymour Group

Performance of the Year, Art Music Awards, for The Australian Art Orchestra and Sruthi Laya, 2013

Order of Australia Medal for contribution to Australian music, 2010

APRA Award for Jazz Composition of the Year, 1995

‘The Arrival’ with Ben Walsh’s Orchestra of the Underground,

1991, tour of Europe including the Brecon International Jazz Festival, Outside In Festival, Crawley, the Jazz Café, London, the Edinburgh Festival, BBC live to air broadcast

Sandy has also appeared as a soloist with Western classical music ensembles including The Australian Chamber Orchestra, The Seymour Group and Synergy.

Musica Viva In Schools Program with Mara!, The World According to James and The Umbrellas

Directed a pilot program for improvisation for music education students

Sydney Conservatorium of Music (under the direction of Michael Webb)

Masterclasses in composition and improvisation

The University of Iowa, US