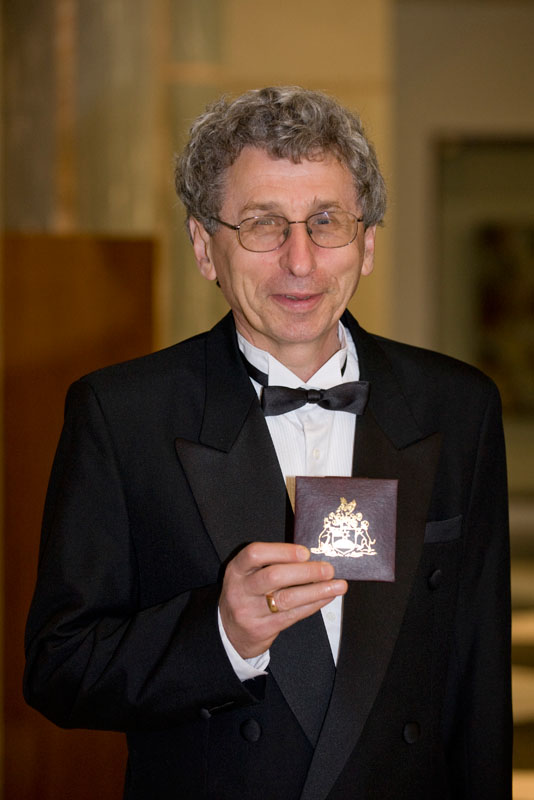 1974-1991 Institute of Nuclear Physics (from PhD student to Leading Scientist) and Novosibirsk State University (from Assistant to Full Professor).

1996 Harvard University (Visiting Fellow and Leader of the topical group on the violation of the fundamental symmetries at the Institute for Theoretical atomic and Molecular Physics).

2009 Lyle Medal (Australian Academy of Science, for research in Mathematical and Physical Sciences)

2005 Award for excellence in postgraduate supervision.

1996 Harvard University (Visiting Fellow and Leader of the topical group on the violation of the fundamental symmetries at the Institute for Theoretical atomic and Molecular Physics).

2000- Fellow of Australian Academy of Science

2010- Fellow of American Physical Society(less than 0.5% of members elected Fellows per year)

2017- Fellow of the Institute of Physics, UK

1. Prediction of million times enhancement of violation of fundamental symmetry (parity P) in neutron-nucleus reactions near p-wave compound resonances. This prediction opened a new area of research and initiated numerous experimental and theoretical studies around the world which lasted for 20 years, with special conferences. This work was awarded the Lenin Komsomol prize.

2. The first theory of the nuclear anapole moment (a magnetic moment violating fundamental symmetries, P and C) and proposals for atomic and molecular experiments which led to the discovery of this moment by the group led by Nobel Laureate C. Wieman. This was the first observation of an electromagnetic moment violating fundamental symmetries and a new method to study parity violating nuclear forces. This discovery is in the history of science. Extensive experimental and theoretical activity on this topic continues around the world.

5. Prediction of Fr atom spectra (before measurements) which helped to detect these spectra. Prediction of unknown spectra and probabilities of electromagnetic transitions in unstable and superheavy elements, and in highly charged ions.

8. Theoretical discovery and study of chaotic many-electron compound eigenstates in atoms and ions.

9. Statistical theory of finite systems (excited nuclei, atoms, molecules) based on properties of chaotic compound states. This is a new general statistical theory that has a huge number of potential applications including methods to calculate matrix elements and amplitudes between chaotic eigenstates. Specific predictions include the enhancement of weak interactions and effects of violation of the fundamental symmetries, electron recombination and combination (inelastic) photon scattering, and suppression of the photoionization via many-electron resonances. Time-dependent problems such as an increase of entropy, transition to the equilibrium state and (non-exponential) decay of the doorway states have also been considered.

11. Theory of the exchange-assisted tunnelling. The exchange interaction and correlations radically change the behaviour of a quantum particle in a classically forbidden region. Instead of the conventional exponential decrease, the electron wave function decreases as r - 2 inside an atom or molecule, and as

r - 3 , r - 3.5 and r - 4 in 1D, 2D and 3D crystals, respectively. An example of the application is the enhanced annihilation of a positron with the inner shell electrons.

12. Proposal of new methods to search for space-time variation of fundamental constants including the Many-Multiplet method in astronomy and comparison of frequencies of two optical clocks in the laboratory. Proposals and calculations of the enhanced effects in atoms, molecules and nuclei. Now, the majority of the precise results in this very popular area of research from Big Bang nucleosynthesis and quasar spectra to atomic clocks are based on our ideas and calculations.

13. Proposals of new atomic clocks of higher projected accuracy and smaller size, including “magic angle” and “micromagic” clocks, highly charged ion clocks, clocks with zero thermal shift, and specific schemes for nuclear clocks. Proposals of the clocks with strongly enhanced sensitivity to the variation of the fundamental constants.

15. Cosmic sources of violation of the fundamental symmetries, new effects of Dark matter in atoms and pulsars. The suggested effects are linear in a very small constant that quantifies the interaction between dark matter particles and ordinary matter. This gives an enormous advantage. Previously discussed effects are quadratic or quartic.

19. Laboratory limits on the anisotropy of the speed of light (studied in the famous Michelson-Morley experiment) have been improved by 10 orders of magnitude. This anisotropy leads to anisotropy of the Coulomb interaction, which affects atomic spectra.

20. Exponential enhancement of nuclear fusion reactions by condensed matter environment (motivated by the “cold fusion” accelerator experiments). In the projectile-target collision of light nuclei (e.g. d+d) a half of energy goes to the motion of the centre of mass. If the target nucleus is placed inside a crystal consisting of heavy atoms, after several “preliminary” collisions the momentum of the centre of mass may be transferred to heavy atoms without energy loss, i.e. all the energy goes to the relative motion (the projectile-target case is transformed into the colliding beams case). This increase of the relative velocity exponentially increases the penetration through the Coulomb barrier. Our calculations have shown that the exponential enhancement of the nuclear fusion happens at the energy of the projectile smaller than1 KeV.

21. Extension of the famous Schiff theorem about the screening of the static external electric field in atoms to the cases of an oscillating electric field and oscillating nuclear EDM. Applications include measurability of nuclear electric dipole moments, search for dark matter and effects of atomic electrons on nuclear reactions.

Member of International Advisory committees for a number of conferences, organiser of session on Variation of the fundamental constants, violation of the fundamental symmetries and dark matter at The Sixteenth Marcel Grossmann Meeting on Recent Developments in Theoretical and Experimental General Relativity, Astrophysics and Relativistic Field Theories (MG16). I also organised such session at MG15, MG14 and MG13 (every three years) and satellite conference on a similar topic at International Conference on Atomic Physics (ICAP22).