Geostorage: Why is it so important in the zero carbon world? 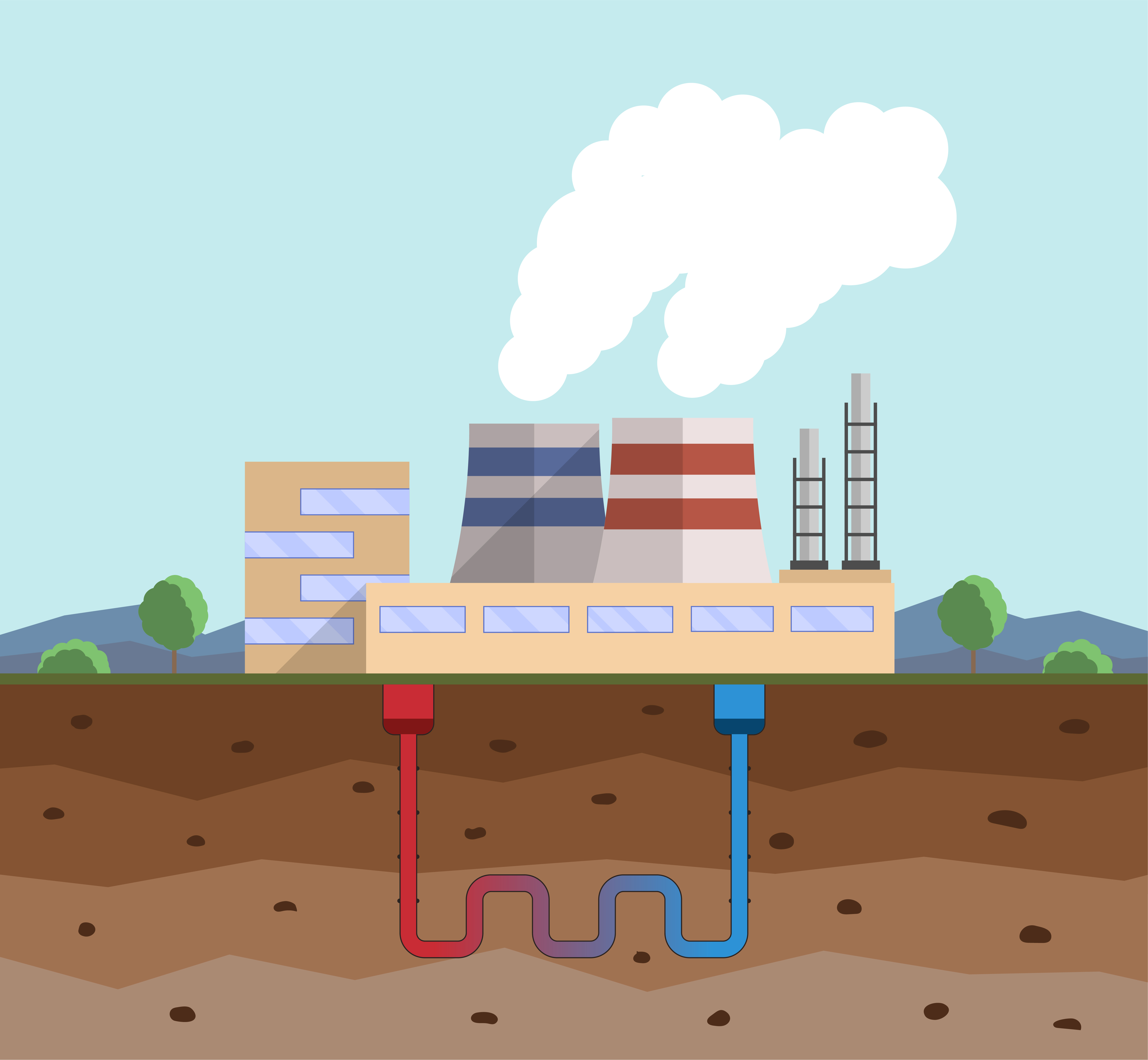 Geostorage has been promoted as a vitally important technology in the transition to a new era of zero carbon.

It involves the storage of fluids and gases in the subsurface of the earth, including the long-term sequestration of captured carbon dioxide to help prevent global climate change. It is also a way of storing green energy underground for use on demand.

UNSW Professor Klaus Regenauer-Lieb, from the School of Minerals and Energy Resources Engineering, is an expert in geomechanics, geophysics and geothermics and believes the development of geostorage solutions over the next decade is vital given the current issues with CO2 emissions and a desire for large-scale clean energy production.

“If we want to combat climate change, then CO2 sequestration – that is storing it permanently underground – is absolutely necessary,” Professor Regenauer-Lieb says.

“We are living on a planet with 7.6bn people and consuming more and more energy every day. But I believe we are on the verge of a new era, where environmental concerns are taking a priority and that makes geostorage an exciting discipline for the future.

“This is a big opportunity for the whole planet because at the moment we are living beyond our resources and we need to start getting clever with our environment to address some of these fundamental issues.”

Here, Professor Regenauer-Lieb helps to explain everything you ever wanted to know about geostorage.

Geostorage is, very simply, the process by which something is stored in the ground.

There are two main forms of geostorage. The first is the permanent storage of gases or liquids – especially those that are damaging the environment - which it is beneficial to store underground forever.

An example would be carbon dioxide sequestration where the harmful CO2 is captured and, most usually, pressurised until it becomes a liquid before being injected into porous rock formations in geologic basins.

The second form of geostorage is the short or medium-term storing of energy – in the form of a gas, or heat – which can then then be extracted for use at some point in the future. 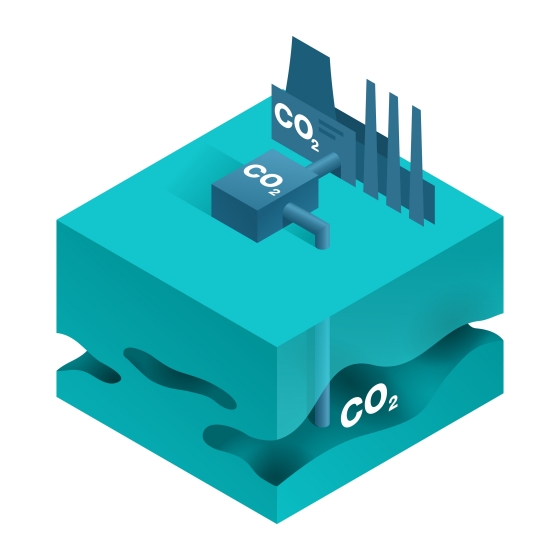 CO2 sequestration is the process by which carbon dioxide is captured from the atmosphere and then stored permanently underground. Image from Shutterstock.

Is it hard to store liquids or gas underground forever?

It is relatively easy from an engineering perspective. Old, abandoned gas and oil fields are available for geostorage of these materials, which can be pumped in, and the reservoir then sealed up permanently.

The key issue here is to ensure there is no leakage back into the shallow aquifers, which are the rocks that hold groundwater.

But in most cases the geological strata will have its own natural seal in the form of clay-rich layers, such as shale. The reason we find gas or oil reservoirs in the first place is because of those seals.

Therefore, putting unwanted gas or liquids back into those reservoirs is usually quite straightforward, if the integrity of the seal is properly examined to ensure it isn’t compromised and material can’t leak through the system.

What about storing things underground that you want to use in the future?

Storing heat or gas in the ground that are to be recovered at some point can be more complicated, because geoengineers can’t just create a permanent seal.

In this scenario, the material is continually being injected into an underground system and also extracted – and that puts additional stress on the reservoir.

The geomechanical term is huff’n’puff, which is a process that alternates injection and production from the same reservoir.

Short-term geostorage utilises either an Open or Closed Loop system, depending on the material involved. 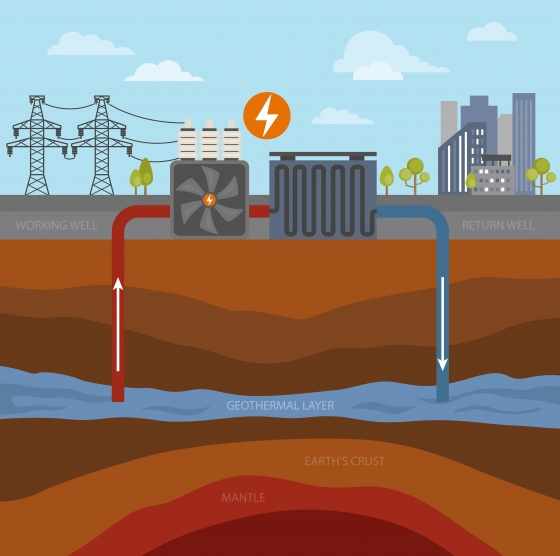 Geothermal storage systems store hot water underground, which can then be used to produce electricity. Image from Shutterstock.

An Open Loop system injects the material which passes through the porous rocks and then gets trapped in the reservoir until it needs to be extracted. One issue is that whenever an extraction takes place, more gas or liquid needs to be re-injected to maintain a net zero mass balance.

One major problem with an Open Loop system is that if the permeability pathways are destroyed the project will have to be abandoned.

Alternatively, a Closed Loop system involves a fully encased drill stem that goes underground and then comes back out at the surface. In this system it is only possible to exchange heat, rather than a gas or a liquid.

Why is geostorage of energy or heat so important?

The two main issues are the amount of energy that can be stored in batteries, and the variability in supply of energy from renewable sources such as solar or wind farms.

Scaling up green energy production is currently limited by the capacity of batteries, which is the traditional way of storing energy so it can be used on demand when needed.

Those batteries require lithium – the extraction of which produces significant carbon emissions, as well as being a limited resource that is currently in huge demand due to the desire for large-scale clean energy-storing systems. 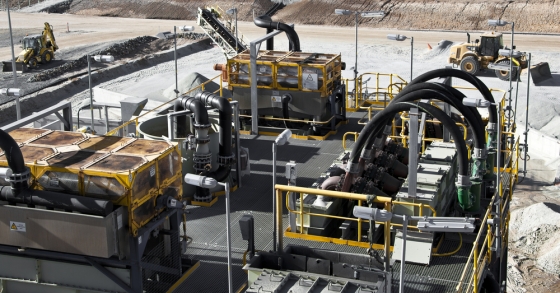 The mining and processing lithium, which is a vital component of batteries to store renewable energy, is often less than environmentally-friendly. Image from Shutterstock.

It’s only recently that other solutions apart from battery storage have been considered, and whenever large-scales are being discussed then geostorage is often a sensible option.

Geothermal storage, for example, can turn environmentally friendly solar or wind energy into hot water and then inject it underground for storage and use in traditional electricity production at some stage in the future.

This geostorage helps to alleviate the problem associated with the short-term variable nature of solar and wind – in that energy cannot be produced when the sun is not shining or the weather is totally calm.

Another important development is underground hydrogen storage. Hydrogen is often discussed as being the fuel of the future, and can be produced with zero carbon emissions, but it is relatively difficult and potentially dangerous to store at large-scales in conventional tanks.

Depleted oil and gas fields, or even underground salt caverns, are an attractive option for the geostorage of hydrogen in large enough quantities to make it commercially globally viable.

Carbon sequestration is a form of geostorage. How important is this technique in the battle against climate change?

The word sequester means to hide away. Carbon sequestration is the process of capturing CO2 that is unwanted in the atmosphere and putting it in the ground forever.

CO2 is generated from the things we take out of the ground, such as when we use coal and oil and carbon, and there is no way of storing CO2 forever above ground.

Therefore, sequestration is a very important process in terms of combating climate change.

Many experts believe there is no other long-term global-scale solution, other than getting the CO2 back into the ground.

What are the current limitations in terms of geostorage?

One issue is the lack of infrastructure to easily transport over long distances many of the things we want to store in the ground. There is currently no network in place, such as for gas and electricity.

So, for example, that means carbon sequestration sites need to be close to the places where the CO2 is being produced or captured.

The same has previously been true for hydrogen which requires either a large container to store it as a compressed gas, or a more specialised and energy-hungry system to store it in its liquefied form at -253°C.

But there are now projects that propose pumping hydrogen into coal, which absorbs the hydrogen, so it can be stored underground to be harvested at a later stage.

In terms of large-scale thermal storage, that is currently only happening above ground. But thermal geostorage provides a fantastic opportunity for the future.

Another potential issue with geostorage is the use of existing reservoirs, especially oil and gas wells, that have not been maintained properly since being abandoned. Those reservoirs can only be used for future storage if they are safe to re-use, which can be costly and complicated since it requires skilled geo-engineers.

What role is UNSW playing in the development of geostorage?

In terms of large-scale geothermal storage, UNSW is already at the forefront of research.

UNSW is committed to training a new generation of geoengineers who will have a holistic approach to the new and exciting field.

UNSW is also a world leader in several renewable energy sectors, particularly solar energy, which have close synergies and involvement with geostorage developments.