How UNSW’s first Business School graduate took every opportunity to learn more, and do better

To celebrate reaching our 100,000+ alumni milestone, we tracked down the first UNSW Business School graduate. Meet Langer Avery, a pioneering businessman who believed knowledge is power. 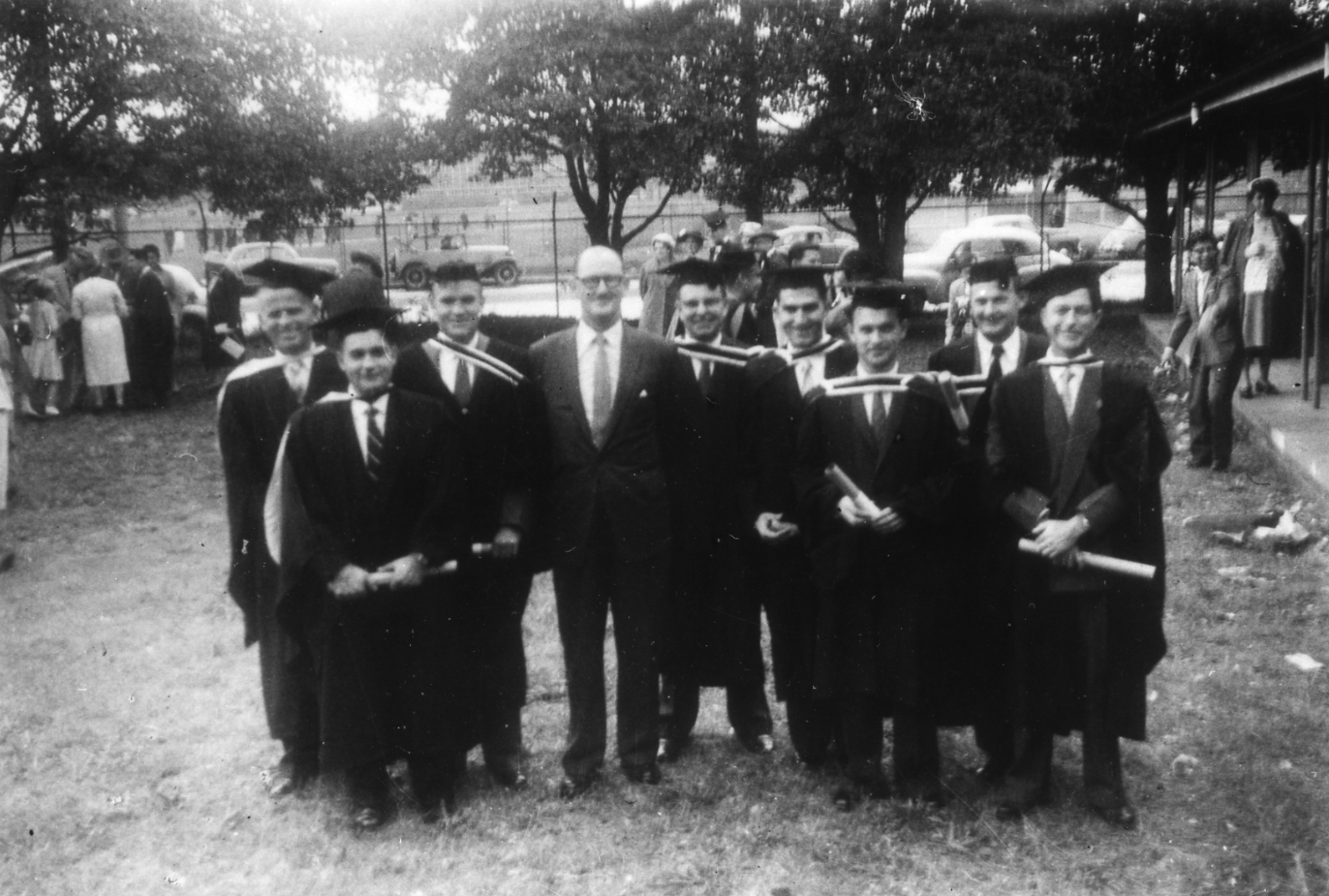 As the first graduate of UNSW’s Business School in 1959, Langer Edward Avery was a true embodiment of the school’s philosophy towards learning. He saw education as an opportunity to broaden the mind and make a difference – a passion he carried throughout his life.

In August 2021, UNSW Business School reached the significant milestone of reaching 100,000 alumni. What started as a single Faculty of Commerce in 1955 has since grown into seven schools, six research centres, five affiliated research centres, one research centre of excellence and the Australian Graduate School of Management (AGSM). It’s a proud legacy, started by the eight graduates of the first Bachelor of Commerce cohort.

“I thought it was quite fitting that my father was the first business student to graduate from UNSW, because education of all forms was certainly an important part of our lives,” says Langer’s son Mark Avery.

“Education was always important to him, and while [Langer] knew this degree was important for his career, he saw it as much more than that. He kept learning in and out of the classroom his whole life.”

Eager to learn more from a young age

The son of a regional bank manager for the Bank of NSW, Langer was exposed to the world of finance from an early age and moved to Sydney and started an accountancy diploma at Sydney Technical College.

When the opportunity arose to transfer into a Bachelor of Commerce, in the newly formed Faculty of Commerce at UNSW (formerly known as NSWUT), he jumped at the chance even though it meant extending his studies by several years.

“This was a time when the education landscape was changing. You had this development of new degrees that had never been offered before. This really excited him, because my father was always looking towards the future of what he could achieve,” Mark says.

Langer was President of the NSWUT Accountancy Association during his time as a student, and in his 1956 President’s address, he clearly understood the importance of the degree to the field of accounting:

“In this period, history has been made for the accountancy profession by the publication of the first university course at an Australian university in which a graduate is able to major in accounting,” he wrote.

Langer told his cohort to embrace the opportunity of university study, encouraging networking throughout the wider industry and within the university. He also mentioned the under-representation of women in the field of accountancy, saying he would like more to take part in the degree and the accountancy profession as a whole.

“I’m sure all will agree that we would like to see our women students take their part in our affairs and activities. There are not many women in the profession, and naturally as a result, very few who enter the school of accountancy. I look forward to a time when representatives of even those few appear on future committees of the association.” [Excerpt from Mr Avery’s Presidential Address to the NSWUT Accountancy Association, 1956]

Mark wasn’t surprised to learn that even as a young man in the 1950s, his father had progressive views.

“He did have quite a progressive view on a lot of things. But that really harks back to the philosophies he held a person. He was always just forever thinking, how can you improve things and do better?”

From UNSW graduate to an international career 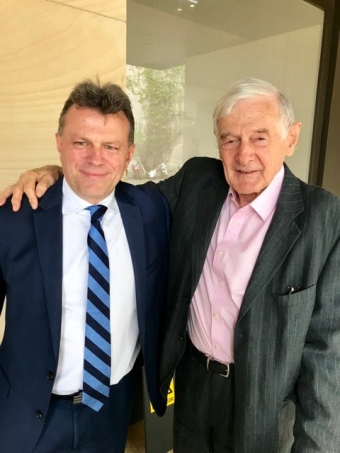 After graduating in 1959, Langer started his accountancy career at Cooper Brothers Sydney, one of the companies that would eventually form PricewaterhouseCoopers (PWC). He gained a lot of experience working on large public company audits but was eager to spread his wings abroad.

“He got an opportunity to go to the London office, which probably helped shape the rest of his career,” Mark says. “It challenged him to learn about international business, something quite unique for a young Australian businessman. Then he went to Montreal, which back then was quite a unique opportunity.”

Upon returning from Montreal, Langer was appointed CFO at Mainline Corporation Limited, one of Australia's largest construction companies during the late 1960s and early 1970s. It was responsible for building some of Australia's most notable landmark buildings like the AMP Building in Circular Quay, Gold Fields House and the Sydney Adventist Hospital in Wahroonga.

Always looking for innovation in business and beyond

Mainline folded in 1974, and Langer established his own accounting and corporate advisory practice, Avery & Associates, in 1975. The practice was extremely successful, listing more than half a dozen public companies on the ASX across many industry sectors over three decades. He also had the opportunity to meet and work with many of Sydney’s most “flamboyant” characters and businessmen.

“That publicly listed company space was an area he loved and was very passionate about, whether it be innovation technology or some mining tenement area,” Mark says.

“My father became involved in these companies by becoming a director or secretary or shareholder as well. This was before investing was really formalised in Australia so he was somewhat of a frontrunner in that space.”
Mark says Langer had seen such a vast progression of how businesses in the finance sector were run, and by the time he’d launched Avery & Associates, he was very enthusiastic about the new technology such as the introduction of computers, to make manual accounting easier.

“Back when dad started, and right up to his time at Mainline they were using manual ledgers and pencils,” Mark says.

“He believed that to do the best business you needed the best tools. So, he was at the forefront of a lot of technology. He invested in Wang Computers, some word processing systems and accounting software packages. Being in the late ‘70s and early ‘80s, it was early days and very expensive.”

Mark said Langer even had a cellular phone in his car before the network had even been switched on.

Encouraging education in all its forms 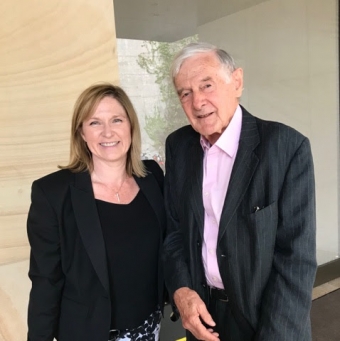 Mark says his father’s tenacious attitude toward learning and business influenced him and his siblings in an indirect way, similar to how Langer was exposed to business and finance growing up. But it always surrounded them. He remembers his dad bringing business proposals home to read and asking Mark what he thought about new technology that wasn’t yet available in Australia.

“Discussing business and politics was very much a part of our family – everything was educational to him. He would read Shakespeare, or history and then recommend a news article, and ask for your view on it. He didn’t want you to be right or wrong, and we would often argue our viewpoints,” Mark says.

“Growing up like we did meant business was at the forefront of our thinking always. It wasn’t by design, it’s just what happened. He wanted us to be well rounded, beyond just getting a degree or qualifications, but learning about the world,” Mark says.

“He did think that a lot of people were their own worst enemies, because they’d set a limit to where they can go in life. How much they would learn or change or grow. For us as children, there were no limits. Mum and dad encouraged us by saying whatever you want to do, go for it. But it's up to you to do your best.”

Langer Avery was a passionate believer in the power of education, building on everything he learned from a young age and throughout his career to direct his efforts in business and in life. Mark says he took to life like a chess player, taking opportunities and not just looking at the next move, but thinking about what’s on the road ahead.

“If there was one thing he firmly believed in, it was knowledge. That thirst for knowledge was always there, and maybe that was sparked in his university days. I know he would’ve seen his degree as a great opportunity and to think he was one of the first to take it is pretty incredible.”