Out of this world! How UNSW helped shape future astronaut Dr Meganne Christian

The sky has proven to not be the limit for the UNSW Engineering alumna, who is poised to become the first Australian woman in space. 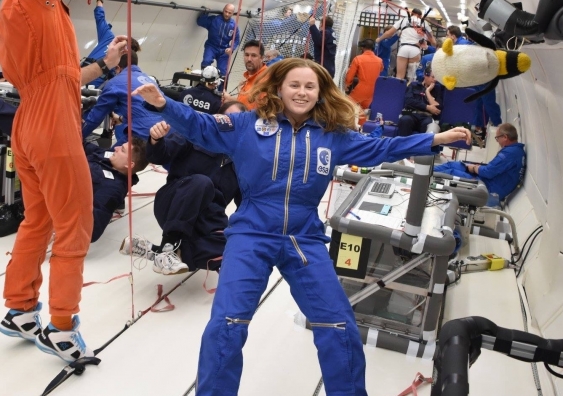 How does a young girl from Wollongong studying Industrial Chemistry at UNSW Sydney go on to be selected as an astronaut with the European Space Agency (ESA)?

In the case of Dr Meganne Christian, the journey has meant throwing herself into as many things as possible, grabbing every opportunity with both hands and not being afraid of new and exciting experiences.

From her first year as an undergraduate in 2005, to completing a PhD from the School of Chemical Engineering nine years later, the path has since led to Italy, plus a 12-month spell in isolation in Antarctica, to now being chosen as a member of the ESA astronaut class of 2022.

“I guess it’s a cliché to say just follow your dreams,” says Dr Christian, who now lives in Bologna, working as a researcher for the National Research Council of Italy.

“But to add to that – sometimes you don’t know what your dreams are. So look out for opportunities and take them when you can. Don’t let them go, because some really interesting things can come from them.”

It certainly does not get much more interesting than being chosen to become an astronaut – with Dr Christian potentially becoming the first-ever Australian woman in space if she is selected to go on a mission.

From O-Week to Zero-G

Her role would be to conduct scientific experiments and research, while also being highly trained in the operations of the spacecraft.

It promises to be a high-pressure, intensive experience, but one Dr Christian believes she is well prepared for after life at UNSW!

“I think being at UNSW definitely shaped me. One of the things I remember is that I really took every opportunity that came up,” she says.

“At one stage I was in a revue and I think I had seven exams that same week. I was on the Relay for Life committee, I was involved with the Yellow Shirts and became an O-Week coordinator, so I was determined to make the most out of everything and I think it made me a well-rounded sort of person.

“It also helped teach me how to organise my time and to instil discipline.”

Perhaps surprisingly, Dr Christian believes her experience as an O-Week coordinator in 2011 actually did play a role in her successful application ahead of 22,500 other candidates to become an ESA astronaut nearly 20 years later. 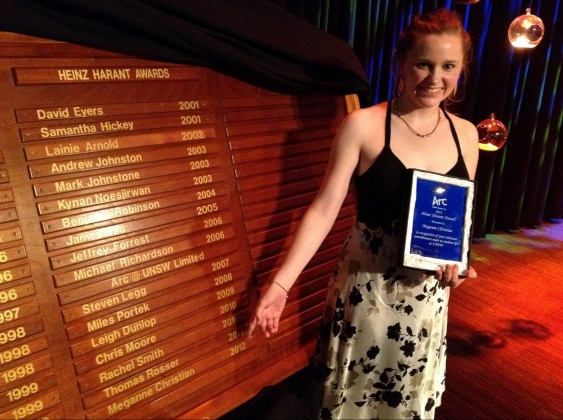 “I do still have that on my CV and I think it was relevant for astronaut selection because they are looking for people with teamwork and leadership qualities. They do psychological testing and they want to understand whether you're the kind of person who gets along with people easily and can be both a leader and a follower,” she says.

“They look at everything about you as a person. They are interested in what you were like as a child, how you grew during those formative years at university and then what has happened in your life since then – so it definitely played a role.

“And although I am obviously biased, I do think UNSW has the best O-Week of any university in terms of showing you what is available and encouraging people to get involved.”

From a technical and scientific point of view, Dr Christian learnt a range of skills during her studies at UNSW which have given her the foundation to enjoy an interesting and varied career.

As a Co-op Scholar, she received a final grade of Honours Class 1 and the University Medal for her Bachelor of Engineering degree, before completing a PhD for research into hydrogen storage which also earned her the Dean's Award for Excellence in Postgraduate Research for her doctoral studies, the UNSW Research Excellence Award and the National Postgraduate Student Energy Award from the Australian Institute of Energy. 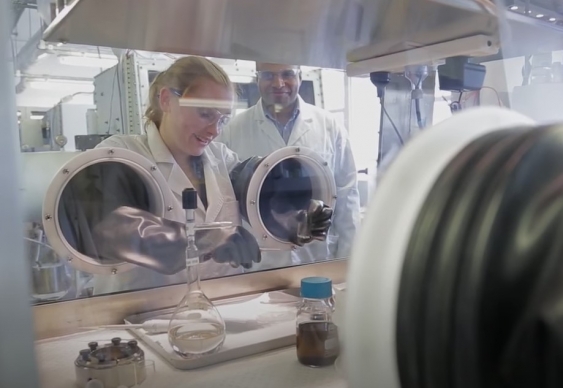 Dr Meganne Christian working in the laboratory at UNSW during her postgraduate studies. Image from UNSW

“I really loved maths as a child, which is what steered me to the engineering side of things, although my dad was also a chemist, so I suppose that had an influence,” she says.

“But what really attracted me to UNSW in particular was the excellence of the Engineering faculty and the Co-op Scholarship and the opportunity to get actual industrial experience.

“Then, my PhD was on hydrogen storage in the nanomaterials field. And a lot of the techniques that I learnt at that time, in terms of characterising materials, have helped me in some of my future roles.”

Dr Meganne Christian featured in this UNSW video back in 2013, explaining her research into hydrogen storage.

Following the completion of her PhD in 2014, Dr Christian – who was originally born in UK before moving to Australia as a child – relocated back to Europe to conduct research on graphene with the National Research Council of Italy.

In that role, she got a first small taste of what life might be like as an astronaut while carrying out experiments in zero gravity conditions during a parabolic flight.

The experience, onboard a specially designed Airbus A310 which continually climbs and then goes into ‘free fall’, offers the feeling of weightlessness for around 22 seconds each manoeuvre.

The plane repeats the procedure more than 30 times to allow researchers to conduct their experiments, for a total of 10 minutes in space-like zero-G conditions.

“Weightlessness is amazing,” says Dr Christian. “You can get a very small sense of it when you go on a roller-coaster and there is a big drop, but on a parabolic flight it goes way beyond that and is just incredible.

“That first time I did it I enjoyed it a lot, but I then did it again a few years later and I was incredibly sick and it was not a fun experience.

“At that time I was just thinking about applying for the ESA astronaut program and I asked the doctor onboard whether he thought it was a big problem. He actually told me that one of the people who operated the parabolic flights was an ex-astronaut and he would also get sick from them.

“The thing that makes you feel sick in parabolic flight is completely different to what might make you suffer from space-sickness, so that was reassuring to know.”

Another adventurous role that no doubt had a positive impact on being chosen as an astronaut, was an eight-month placement at the Concordia Station in Antarctica. 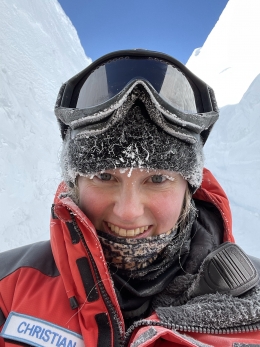 Dr Christian was part of a team of 13 who were completely isolated, just 1000 miles away from the geographic South Pole, regularly enduring temperatures of minus 65 degrees Celsius, with extreme lows of minus 80!

Similar to her time at UNSW, she decided to grab an opportunity when it presented itself, even though the role was focused on atmospheric physics and meteorology projects which were not her specialty.

“Going to Antarctica meant doing something completely different – natural sciences rather than applied sciences,” she says.

“I wasn’t expecting that they would select me, but I think they were interested because the skills I had obtained were transferable.

“I had to run the observatories, be a technician and troubleshoot and problem-solve. And on the people-skills side of it you need to be able to get along with a small group of people in isolation for a long period of time.

“Being in Antarctica crystallised the idea I had about applying for the ESA astronaut program. I was running other people’s experiments, doing some important research and really enjoyed it. I realised what was being done in Antarctica was quite similar to what is happening on the International Space Station.

“So I guess that played a part as well.” 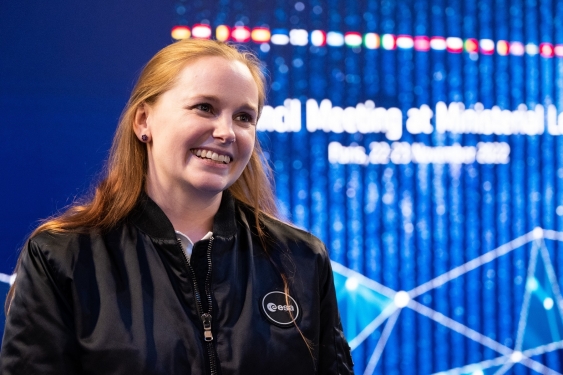 Dr Christian was selected ahead of 22,500 other candidates to join the 2022 ESA astronaut class. Photograph from ESA

For now, Dr Christian is still pinching herself that the journey from Wollongong, via UNSW, to Italy and the South Pole could soon result in a trip to space.

“As a kid, I thought being an astronaut was the coolest job in the world. But growing up in Australia at that time I didn’t see any opportunity for it to actually happen,” she says.

“There was no space agency in Australia back then, although I did get the chance to go to America when I was young and visit the Smithsonian Air and Space Museum in Washington, DC and the Kennedy Space Center in Florida which I always remember.

“Now I’ve been selected as a reserve astronaut – although I don’t have a mission guaranteed, so I am just waiting for something to come up. But that is just a continuation of the wait I’ve had for the past 18 months as part of the selection process.

“There are a lot of amazing space projects coming up and I am looking forward to being a part of it. It’s even possible we could have a collaboration between UK and Australia and ESA to potentially have an Australian flag fly to the International Space Station, which is a really exciting prospect.”