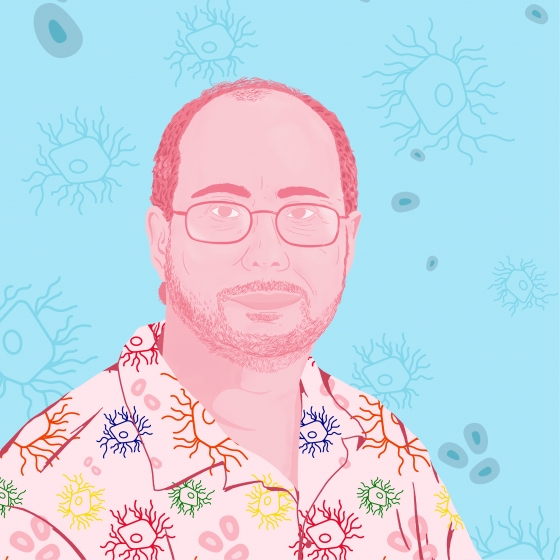 Pioneer neuroscientist and advocate of diversity in science.

Ben A. Barres was born as Barbara Barres in West Orange, New Jersey, on 13 September 1954. He had three siblings, including a twin sister. His father was an Italian salesman who sold baby furniture and later liquor, while his mother was a Lithuanian/Jewish homemaker.1 From an early age, Ben knew that he felt more like a boy, although he was assigned female at birth.1 Throughout his high school years, he was bullied due to his gender expression.1

In 1972 he was accepted to MIT with a scholarship to study a Bachelor of Life Sciences. Because of his sex, he had difficulty finding a research lab to complete his research thesis.1 After he graduated from MIT, he attended Dartmouth Medical school from 1976 to 1979 to complete his medical degree. Subsequently, he completed a residency in Neurobiology at Cornell University and a PhD in the Harvard Neurobiology lab with Dr David. He undertook his post-doc at University College London.2 In 1993, Ben joined the Faculty of Neurobiology at Stanford University, where he stayed for the rest of his career.

In 1997, he transitioned and, since then, he openly discussed and described the challenges he had faced as a woman in science.3 Along the way, he became a hero and role model for the LGBTQIA+ community and early-career scientists. In his essay ‘Does gender matter?’ published in Nature4, he provided scientific evidence and challenged the hypothesis that gender differences impact scientific ability.

Ben Barres is mostly known for his scientific discoveries and work on glia cells in the brain and how these cells play a fundamental role in forming and eliminating synapses.2,5 Glia cells are the network of the brain and are crucial for the development of the nervous system.

During his career, he published 167 peer-reviewed papers in top scientific journals such as Cell, Nature, Science and Neuron.5 Much of his work is under the name Barbara Barres. He was also elected as a member of the National Academy of Sciences in 2013 and was the first openly transgender member.

In 2016 he was diagnosed with pancreatic cancer, from which he died on 27 December 2017, at the age of 63. Ben Barres dedicated his last years describing the bias against women and promoting equal opportunity in science. In his own words, “I lived life on my terms: I wanted to switch genders and I did. I wanted to be a scientist and I was. I wanted to study glia and I did that too. I stood up for what I believed in and I like to think I made an impact, or at least opened the door for the impact to occur. I have zero regrets and I’m ready to die. I’ve truly had a great life.”1,2