Spatially non-homogenous states (patterns) can spontaneously emerge in a multitude of Natural of human made systems. In many cases of interest, the interplay between nonlinearities and diffusion seeds a symmetry breaking instability (discovered by Turing in his pioneering work on morphogenesis) that opens the way for the emergence of a rich gallery of patchy motifs.

In many relevant cases, distinct populations often interact via an intricate architecture of nested couplings, which can be adequately represented as complex heterogeneous networks. Understanding the patterns onset for networked reaction-diffusion systems is thus a major challenge.

In several realms of application, the underlying networks are not static but rather evolve over time; the couplings are created, destroyed, or rewired as time goes on. Prototypical examples are contact networks with their applications to epidemic spreading.

In this talk, we consider the process of patterns formation for reaction-diffusion systems anchored on networks that evolve over time. The framework we propose is general enough as to include networks that are periodically rearranged in time (both in a continuous or discontinuous way), but also nonperiodic or even stochastic time varying networks.

Interestingly enough, our formalism is able to describe the oscillation death phenomenon, i.e. the possibility for an initially synchronized state to evolve towards an asymptotic inhomogeneous steady configuration, in response to an externally injected perturbation. 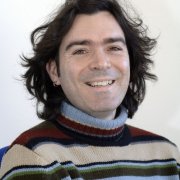 After a Masters degree in Physics (University of Florence, June 1995) Timoteo Carletti continued his doctoral studies in Florence (Italy) and in Paris (France) at IMCEE, and finally defended his doctoral thesis in mathematics in February 2000.

Hence in 2005 he moved to Belgium where he was hired at the University of Namur as a lecturer, then as a professor (September 2008), and finally as a Full Professor (September 2011) in the Department of applied Mathematics. In 2010 he was among the creators of the Namur Center for Complex Systems, naXys, and he assumed the leadership of this research center (2010-2014). He is head of the "Dynamical systems" team at UNamur since 2008.

He supervised several PhD theses and master theses mainly in mathematics, but also in economics, biology and computer sciences. He actively contributes to the doctoral and postdoctoral training in the field of complex systems in Belgium, through its presidency of the Graduate School FNRS "COMPLEX" (2011-2017). He he is author of more than one hundred publications, in fields as varied as: biology, celestial mechanics, chaos detection, complex networks, control of systems, dynamic systems, economics, particle accelerators, social dynamics.

He is a member of numerous scientific boards and reviewer for several journals. He organized several national and international conferences - among which ECCS12 in Brussels (Belgium) - and he is PI or co-PI of several national - among which the IAP VIII / 19 DYSCO - Dynamical SYStems Control and Optimization DYSCO - and international research projects.