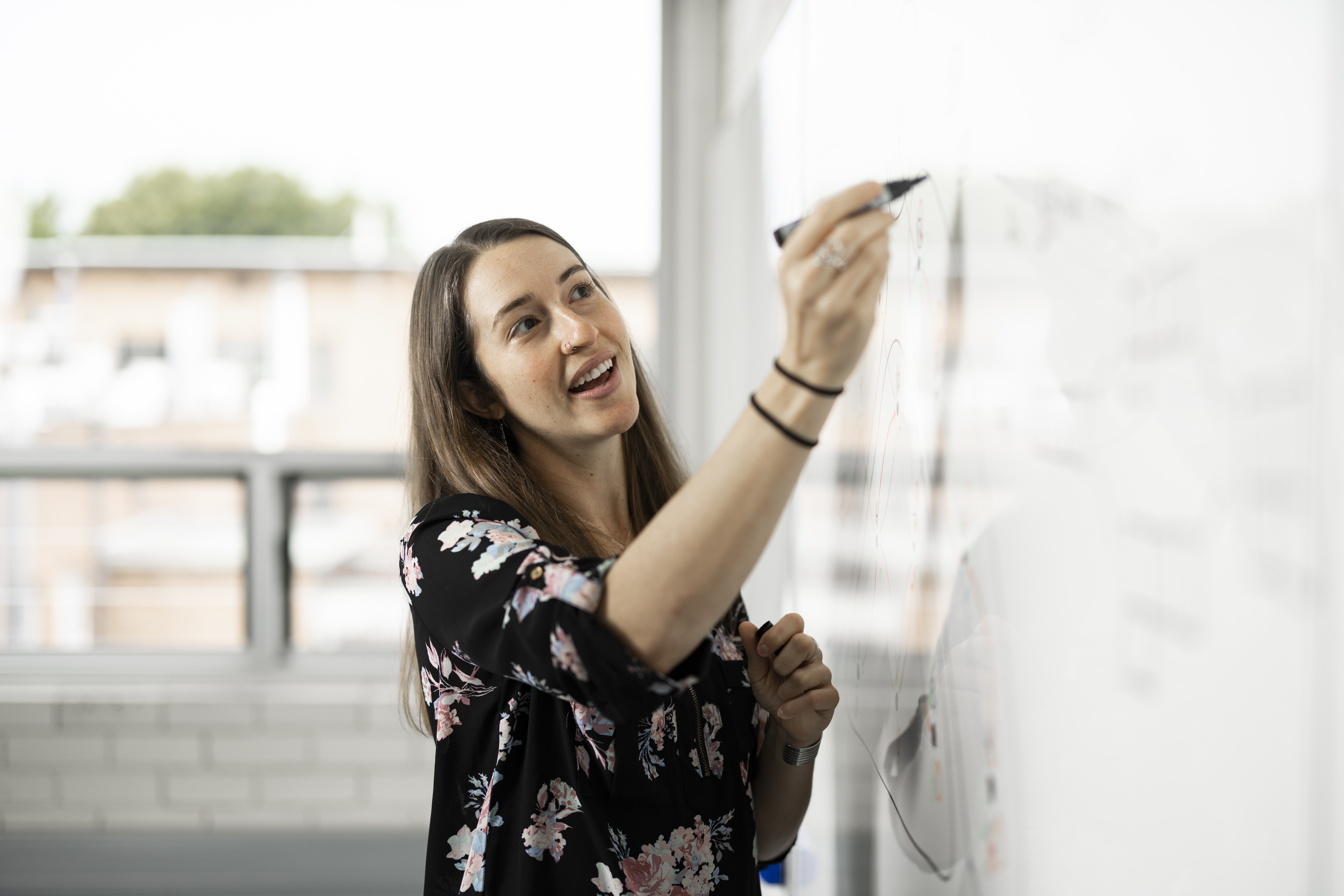 Dr Anna Romanov is a Lecturer in the School of Mathematics and Statistics. In her interview, she describes her path to becoming a mathematician, shares what she enjoys most about outreach, discusses her current research, reveals her approach as the Pure Maths Seminar organiser, and more.

During your presentation at the 2022 Girls Do the Maths workshop, you said that as a child you noticed patterns around you and daydreamed about symmetry. Is this what first sparked your interest in mathematics?

In retrospect, I think it was. But at the time, I had no idea that what I was doing was in any way mathematical. My conscious interest in mathematics didn’t start until much later – not until my third year of university, actually. Up until then, I had a vague sense that math was “useful” so I should study it for my own good, but it wasn’t until I took my first class on point-set topology that I saw that math could also be beautiful and creative. I had a fantastic professor, Renzo Cavalieri at Colorado State University, who devoted an entire semester to letting us “discover” the classification of compact topological surfaces on our own. This open-ended explorative way of doing mathematics was completely different to the algorithmic approach that I had been taught up until that point, and it totally blew my mind.

When I Googled you (!) I read that people told you that you “should become an engineer”, but since pursuing a degree in mathematics you have “never looked back”. Please tell us a little about the path that led you into mathematics, and not on the course that was expected.

I suppose that on paper my path to mathematics was relatively straightforward – I got my bachelor’s degree in mathematics, got a PhD a few years later, then went on to enter academia through a series of postdoctoral positions. The unexpected bit (at least to me) was that I actually kept going! When I started down this path, I viewed it as something to do temporarily while I figured out what I wanted to do with my life. I also had very little confidence that I could be successful as a mathematician, so I just assumed that somewhere along the way I wouldn’t make it and then I would have to reassess and decide what to do next. But the farther I went down the path, the more interested I became, and the more I realised both that it was right for me, and that I was right for it.

What is your current research field and focus, and can you share some of your recent results?

My research is in representation theory - geometric representation theory if you want to be a little more specific. The catch phrase of representation theory is that it is “the mathematical language of symmetry” because it develops tools for analysing symmetry in different mathematical settings. I like to study situations which have continuous symmetry, like the symmetries of a sphere. Such symmetries show up in the guise of “Lie groups”, which are the main focus in my research. I love situations in mathematics where two seemingly unrelated worlds reveal themselves to secretly be the same, and most of my work with Lie groups involves studying them using such connections with other fields. My most recent paper describes some subtle internal structure of representations of real Lie groups in terms of Soergel bimodules, which are objects arising from sheaves on algebraic varieties.

You have some talks coming up in the next six months: for UNSW Canberra's number theory seminar, at the Pacific Rim Mathematical Association Congress in Vancouver, Canada, and at the Categorification in Representation Theory conference at the University of Sydney. Can you tell us about the talks you plan to deliver at these events?

I had a fantastic time visiting Tim Trudgian’s research group at UNSW Canberra last week and meeting some of our colleagues in capital country. As an attempt to bridge the gap between my interest in Lie groups and their interest in number theory, I spoke with them about the Sato-Tate conjecture, which describes a fascinating and mysterious occurrence of a Lie group controlling a pattern appearing in elliptic curves over finite fields. In my upcoming travels, I will speak with colleagues in Germany, Croatia and Singapore about my recent work on real Lie groups and Soergel bimodules.

I read that you might have a textbook on the cards! Are you able to disclose some info about this?

Back at the beginning of the pandemic (can we even remember back that far?!), Geordie Williamson taught an amazing year-long course at the University of Sydney on the Langlands correspondence. I was determined to follow the course to its completion and not fall off the train, so I typed detailed expanded notes as the course progressed. By the end of the 12 months, I had written a 274-page document! Geordie and I realised that these notes were a unique resource with potential to become something more. They still need quite a bit of work before they are textbook-ready, but this is the long-term plan.

You are the current organiser of the School’s Pure Seminar series, which has received excellent feedback from staff members for being very engaging and valuable. Can you share some details about your approach in coordinating the program?

I have had so much fun organising the Pure Maths Seminar this year. I really want the seminar to be accessible to everyone in the Pure Mathematics group, including honours and PhD students, so I ask speakers to give colloquium-style talks describing the big ideas in their research area instead of specialised research talks. The talks so far have been fantastic – we’ve learned about braid groups, moduli spaces, the Riemann hypothesis, and many more topics. Starting in Term 2, we moved to a hybrid format, so participants can attend either in person or online. It’s been great to be back in a room together listening to live talks, and catching up with colleagues at the post-seminar lunch. In Term 3 the seminar will meet on Tuesdays at 12pm, and we have some exciting talks lined up. Come join us!

In June, you were one of the organisers of our Girls Do the Maths workshops, where you also presented a talk and helped to run sessions. What do you enjoy most about outreach?

I love sharing mathematics with people who are just starting to discover it themselves. School students have so much enthusiasm, and being around that energy is contagious. Girls Do the Maths was especially fun for me, because I still remember very strongly what it felt like to be a high school girl deciding what I wanted to do with my life. Being on the other side and speaking with young women about potential careers in mathematics felt like talking to a younger version of myself, which is an opportunity that one doesn’t get very often.

You grew up in the U.S., completing your PhD at the University of Utah and your bachelor’s degrees at Colorado State University. What are the main things you miss about home?

I miss the mountains and I miss burritos. But Australia’s beaches and delicious coffee make up for it pretty well. :)

Your academic career to date has encompassed both the U.S. and Australia. Can you identify any key differences in the academic environment between the two countries?

Australia’s academic environment is smaller (because the population is smaller), which makes Australian mathematics feel more like a community. I love this aspect of it. But in the U.S., the larger size means that there are more conferences and events targeted to my specific research area, so I miss that easy availability of like-minded researchers.