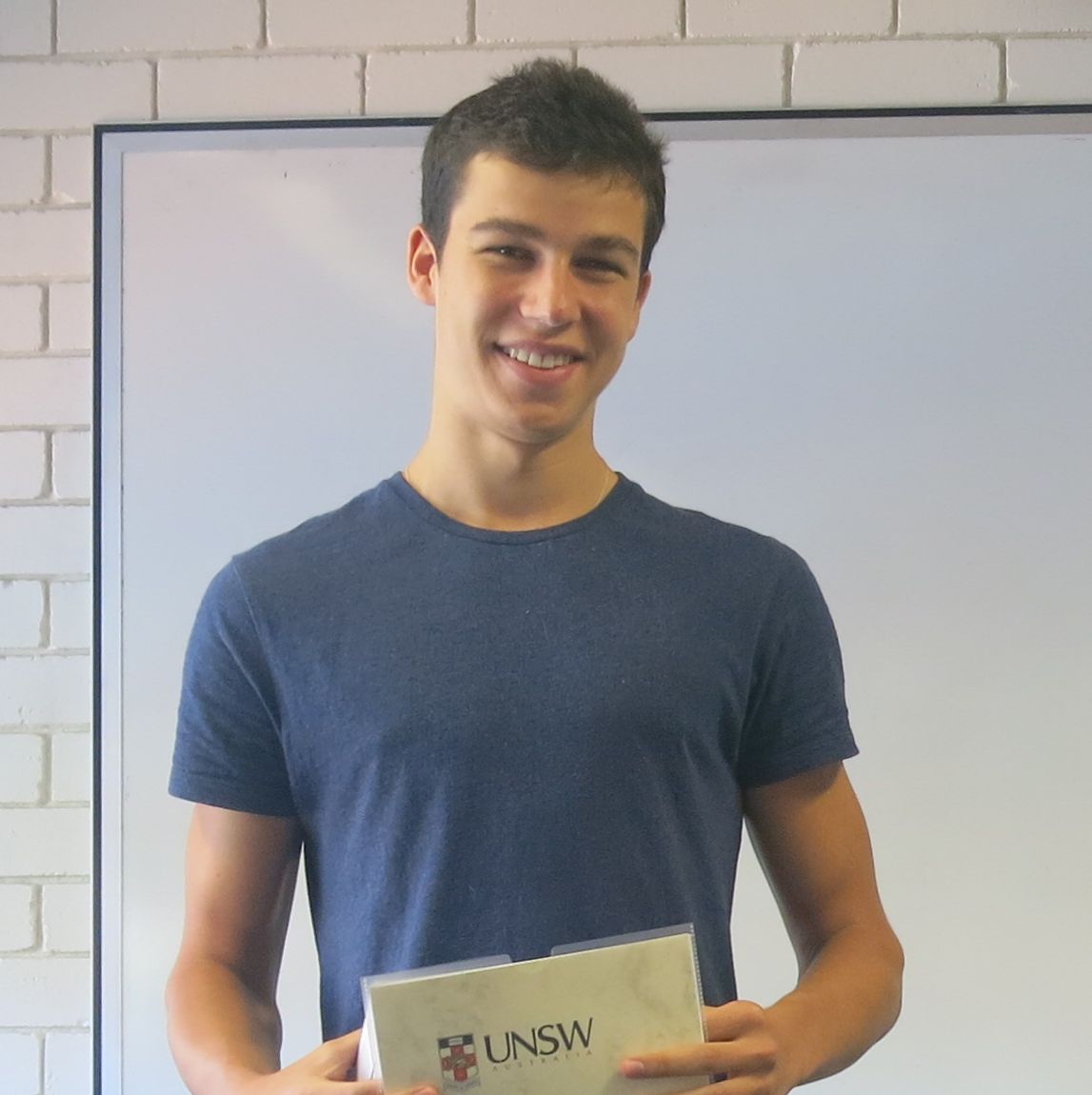 20-year-old Daniel Altman is in his third year of our Advanced Mathematics program. Daniel, who attended Emanuel School, didn't take long to shine at UNSW - he has started to amass a sizeable collection of prizes for his top academic performance. In his interview, Daniel reveals what he likes about maths, the challenges of studying it, his interests away from uni and his experience working as a data scientist.

You were recently awarded three prizes at the School Prize Giving ceremony, for your exceptional performance in courses during 2014. You were also a prize winner in the previous round. Congratulations!

Thanks! That’s a tricky one to respond to off the bat, though maybe a good exercise in underplaying my ego. I guess there’s a lot to be said for just properly understanding the course content.

I heard a rumour that you came first in NSW for Mathematics Extension 1 in Year 11?

Good to hear that’s still circulating... It was quite surreal. I went to a fairly small school and never participated in the Olympiad program, so the maths HSC in year 11 was the first time I had an opportunity to see how I stacked up against students from around the state. I remember sitting in the exam hall, before reading time, being so certain that I was about to blow it that I was already reassuring myself that I would improve when I redid the subject the following year. Next thing I knew I was being called out of chemistry class with the Board of Studies on the line, telling me that I’d come first in the state.

You are enrolled in the Advanced Mathematics program. What inspired you to choose maths at uni?

To be honest, I don’t think any ‘inspiration’ was involved. If I was to choose something similar – say physics – I would only have been interested in the maths underpinning it. I was only attracted to computer science because of its mathsy foundations. Similarly for actuarial studies. It realistically would have been hard to find a convincing answer to the inevitable question: 'why not just do maths?' So I did.

What do you enjoy most about studying maths?

Often it seems that, for many people, enjoying maths is a far more foreign and offensive prospect than enjoying learning, problem solving or developing ideas. To me, maths is one of the most fundamental, least contrived iterations of any of these.

It is a laboured point that in maths - and its solutions, ideas and proofs - lies elegance, creativity and insight. A mathematician (or an aspiring one) is privy to these ideas and has the opportunity to appreciate them (I feel that I do, to some degree). In some ways this makes maths a lonely pursuit: you don’t need to be a footballer to appreciate a great goal, and most people can appreciate a Picasso without being an artist (or at least they pretend to), but for maths you really need to be able to speak the language. This makes it harder for people to relate to a passion for maths, where I think it’s really quite natural.

Also, a part of me probably likes doing things that I’m good at. I think, however, that as I progress mathematically, and the mathematicians with whom I am surrounded become more talented, I will increasingly enjoy maths more for the former reason, rather than the latter.

What things do you like doing that help you switch off from uni work?

Sport is a big one. Until the HSC, I played cricket competitively. Sadly though, the demanding time commitment of high level sport grinding against the academic standards I set for myself meant that one had to give. Nowadays I love watching cricket, AFL and soccer, and fulfil any masochistic impulses by supporting the Eels in the NRL. Given the opportunity, I always enjoy getting out to have a kick, or a hit at the cricket nets. Otherwise standard stuff I guess: friends, beach/swimming, gym, music, movies.

You’ve done some previous work as a data scientist. What did you think of it? Is it an area you would like to pursue in the future?

Yeah, I worked at Smart Sparrow (an ed tech company) for around a year and a half doing research and development and analytics. It was a great experience. Though working on analytics helped me refine my skills in data analysis and code development, I really enjoyed the R&D. It was maybe not too dissimilar to a maths-style endeavour: most of the research papers that I read were at least somewhat mathematical, but more fundamentally, the style of problem solving involved was a very familiar one.

Education is also a great industry: the objective is generally altruistic, results are often quantitative, and it’s something that is crucial in all of our developments. That there is currently no standard in really scalable education makes for very interesting work.

As to whether data science is an area I’d like to pursue in the future – not inherently. Maths can take one so many places – it would probably be remiss to jump at the first that I experience. In all honesty, though, it is overwhelmingly likely that I’ll be using an assortment of the skills I cultivated as a data scientist in whichever area I end up.

What have you found the most challenging thing so far during your studies?

Probably the biggest academic challenge I’ve encountered is deciding the detail in which to learn something, and when I really know it. If you decide that you don’t want to simply optimise for the exam, and genuinely want to learn as much as possible, you quickly run into dilemmas about depth of content vs. breadth of content etc. I’m doing a reading course at the moment, and it’s been quite tricky to decide how much to learn, and how well to learn it (interrogating proofs vs. doing more exercises vs. seeing more theorems vs. expanding an intuition etc.). I think my supervisor might be getting tired of my weekly epistemological mutterings.

Have you been able to apply your maths skills outside of your studies?

Definitely. These maths skills are increasingly informing the way I see the world. More and more I find myself describing stuff mathematically. It’s quite disturbing (and annoyingly quite useful in analysing and describing day-to-day things).

Of course, the work as a data scientist was a more tangible outlet: both maths content and a propensity to problem solve were crucial.

What are your intentions for the future? Have you mapped out a master plan?

I definitely don’t have a master plan at the moment! Whenever I’m asked what I’m doing these days, and I respond with ‘studying maths at UNSW’, I inevitably get hit with some iteration of 'but why do maths if you don’t want to be a maths (presumably high school) teacher?' Ostensibly: 'how could finding x ever be more than a futile exercise designed to find the theoretical side length of some abstract triangle which is literally never to scale?' I usually reply by rattling off enough industry applications of maths to ease their concern/excitement that I’ve made an irresponsible life decision. Actually, though, I still don’t really know ‘why’, or ‘how’.

I think I want to do a PhD after I finish my degree (with maybe some travel in between). I’ve managed to convince myself that the desire to do a PhD is drawn fundamentally from my love of learning and developing maths, rather than a propensity to procrastinate making any major life decisions. Really, I’m still trying to uncover a mathematical path and a way to give that search for x a rewarding conclusion.