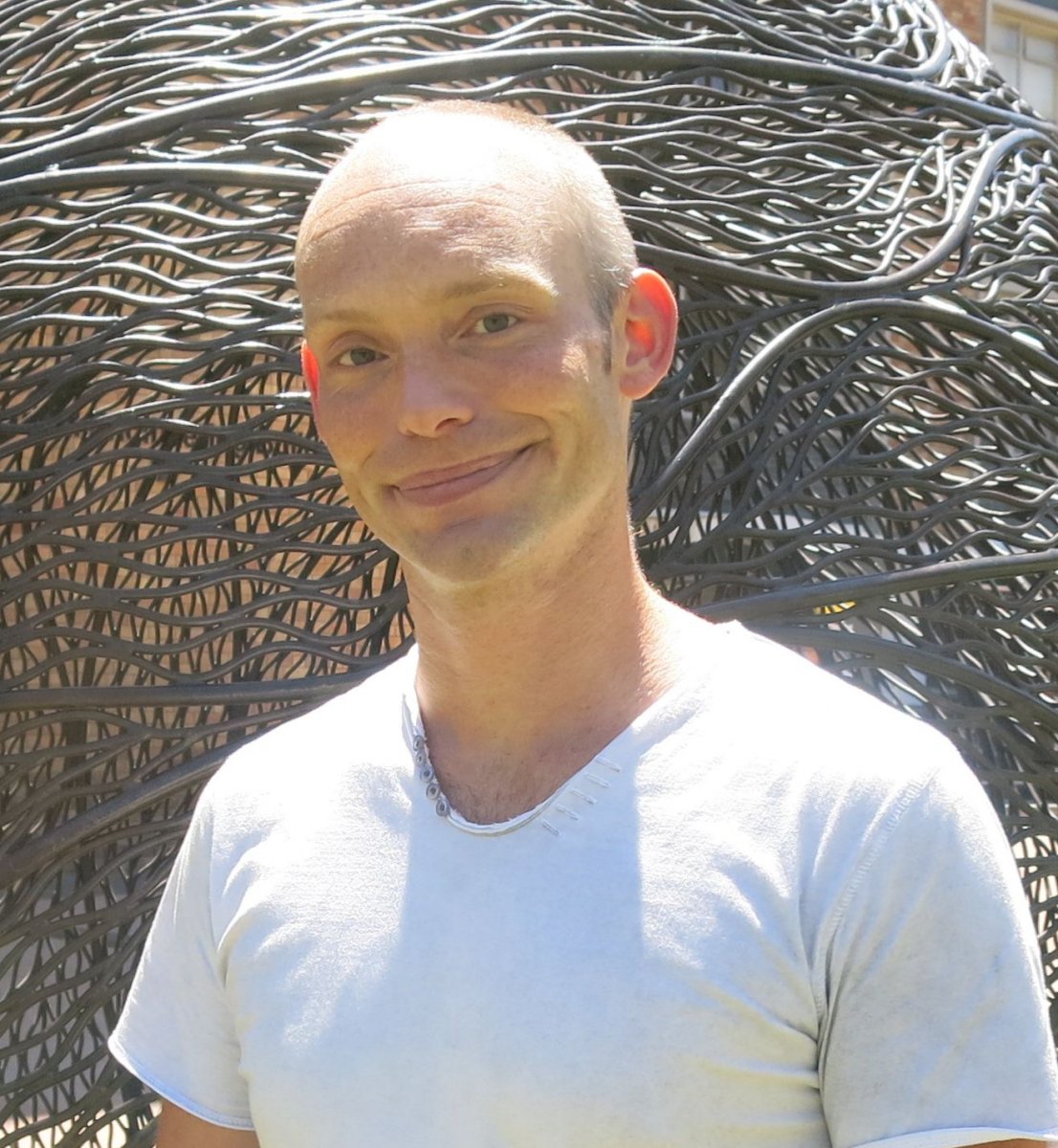 Dr Thomas Britz is a lecturer in the School of Mathematics and Statistics. Originally from Denmark, Thomas joined the School in 2005. In this interview, he reveals that he enjoys all aspects of his job, talks about some cool things that students have taught him, and discusses his research in Combinatorics.

How long have you worked in the School at UNSW, and how did you end up here?

I have been at the school since 2005, as visitor, postdoc (twice), casual lecturer and consultant and since 2010 as lecturer. My then-wife had found a PhD supervisor here in Sydney so we moved here. To begin with, I was a stay-at-home dad minding our first son Loke, but then I got a one-year postdoc at UNSW. It was granted by the Carlsberg Foundation and was quite generous, being tax-free, which really made a difference to my career and our early finances, so I try to show my gratitude by drinking their beers now and then.

When and how did you first become interested in mathematics and what do you like about it?

My parents are nerds like me and introduced me to maths and mathematical thinking pretty early on and it has always seemed to be part of the way I think. Most people don’t have great experiences of maths from their school days, so maths is often seen as hard and rigidly boring and as something that has little to do with everyday life. That is really a pity: to me, maths is an almost mystical way of thinking that pervades almost all of my ways of thinking and interacting with the world and people and emotions. It is a useful scientific tool, a meditative practice, an art form and often great fun. It is often very pretty, though you sometimes need a black belt in maths to be able to see the beauty.

You can even do magic with maths! We use maths to predict the future and see far into the depths of space and understand our own physical existence; we can fly and now even connect to each other in global networks, like spiritual or telepathic connections. We take all this for granted these days and no longer see these things as magical, and I don’t either. However, I do see maths as mystical and intuitive and possibly not part of empirical science when we really look closely at the world. In fact, I doubt that maths has much do with any possibly physical reality when we look really, really closely at these: maths is part of how we think, and the world is almost certainly far crazier than we can ever describe, let alone understand, if it even exists in any understandable way. As you can probably tell, I really enjoy these sorts of ideas too. There is a lot of mathematical thinking in philosophy, as in so many things.

Combinatorics is fun!  My first couple of years at uni introduced me to several areas of maths, like algebra, analysis, geometry, number theory, probability theory and so on. Although I enjoyed and was good at these areas, nothing really gripped me properly and I rarely had fun with this maths beyond what I had to do for the courses. Combinatorics was therefore a revelation to me: it was really fun; it was really diverse and interesting; and it seemed to really resonate with me, and still does. There are various traditions of semi-modern maths, some seeing maths as a serious, no-nonsense natural science. Others, particularly in the British tradition, see maths as a fun and elegant art form that includes puzzles and other 'non-serious' maths. To me, Combinatorics is very much part of this last tradition, and I like that very much, though I do like other sorts of maths as well.

What do you identify as the major challenges in your current areas of research?

There are quite a lot of big and exciting mathematical challenges, and for me, a big challenge is to juggle all my research interests. I have recently tried to broaden my areas of research, and some of these new areas are really exciting, including a project with Dan Hunter and his PhD supervisor A/Prof. Mike Letnic from BEES. We have mathematically modelled what would happen if Tasmanian Devils were to be introduced to the Blue Mountains and surrounding areas, to chase out cats and foxes and to help preserve the Devil. Our results are very interesting (and encouraging) and I am really enjoying this sort of work that might lead to tangible real-world improvements. The bulk of my research is still in Combinatorics though, where I am trying to dig ever deeper. It is a great luxury to be able research, with both breadth and depth, areas that I am interested in, and I think that most people, even our students, would be surprised by the wealth of research results waiting undiscovered and uninvented that you can find in most areas, even old and well-trodden areas.

You are very popular with your students. Do you have a particular teaching philosophy which you think resonates with the students?

Thanks! Well, for one thing, I get excited about maths and that often rubs off on students. I also get excited about teaching students, and I really care about them too, and UNSW students are generally really great, as people and as students. It is really a pleasure to teach here!

Coming from Scandinavia, my views might also be slightly different from the norm. To me, students are just people, like you and me, and they are adults, to be treated like equals and like adults. I give them respect but I also expect that they are responsible, for their own education and for civil behaviour in general, and students almost always live up to this expectation. I also see education as something more than just learning skills and knowledge, especially education at a good university like UNSW. It should also cultivate students, give them culture and maturity, and make them part of traditions in their areas of study.

I therefore try hard to help students understand maths, not just learn it, and give them historical and cultural and even philosophical contexts to their learning. Some students find this annoying and just want to learn how to pass exams but most students appreciate and enjoy my efforts.

Tell me a bit about your Lego proof YouTube video, and the special Rubik’s cubes you had made for our school before Open Day. Are these good ways to communicate maths with non-specialists? What are some other ways?

That video was really fun to make! A Danish friend and colleague, Henrik Kragh Sørensen, was visiting me in January, and we spent half a day playing with a big tub of LEGO and having a great time.

The video accompanied an article that we wrote for Parabola which is the school’s venerable maths journal for high school students. Our article was on picture proofs in mathematics, and the video demonstrated a 'moving picture' proof, though we also really just made the video because it was cool and fun to make.

The Rubik’s Cubes, with their stickers replaced by school and UNSW logos and pretty maths pictures, seemed like a good promotional idea because math-nerds, including potential students, would find them cute and fun. In general, maths is tricky to communicate to non-specialists, and I’m not even sure that it is always a good idea to try; it can be a bit like showing someone an abstract painting by a master artist. It is probably better to communicate the joy and beauty of maths, not the maths itself, and the enthusiasm that mathematicians have, just like having master painters explain why they enjoy painting or a particular piece of art. I would avoid generally formulas and instead use pictures, music, and relatable narratives to convey the flavour of the maths.

What do you enjoy most about teaching?

My job is pretty awesome, and I really love both teaching and research – and I even like administration. Teaching is especially nice though, because I get to interact with students and feel their immediate feedback. I always try to enter a class in a happy and enthusiastic mood, so as to excite and engage students, but I usually exit the class even happier and more excited because of the feedback, to and fro, between students and me.

The other great aspect of teaching is seeing students understand something, especially after they have strained against some hurdle. It is great to be able to help but it is equally great to see the transformation and joy that comes with understanding.

What are some cool things that your students have taught you?

Lots and lots of things! This semester, students taught me a lot about cryptography and computing, and I am very grateful to the students who told me about MML, a computer language for composing music easily. More generally, students have helped me develop as a person. I have for instance embraced more responsibility and leadership, and I am far more confident in public than I used to be. You sort of have to give up being painfully shy when lecturing in front of almost 500 first-year students.

You are originally from Denmark. Is there something in particular you really miss from there?

I sometimes really miss parts of Scandinavian culture and society, and the long and happy summer days and nights, though I certainly don’t miss the long and depressing winters. I miss real rye bread and some of the lollies, especially Tyrkisk Peber, that would be called licorice here but is mostly sugar and ammonium chloride boiled together. It’s funny how you can strongly crave sugar and cleaning chemicals – but then again, Aussies abroad often miss the sticky dregs of salty beer yeast.