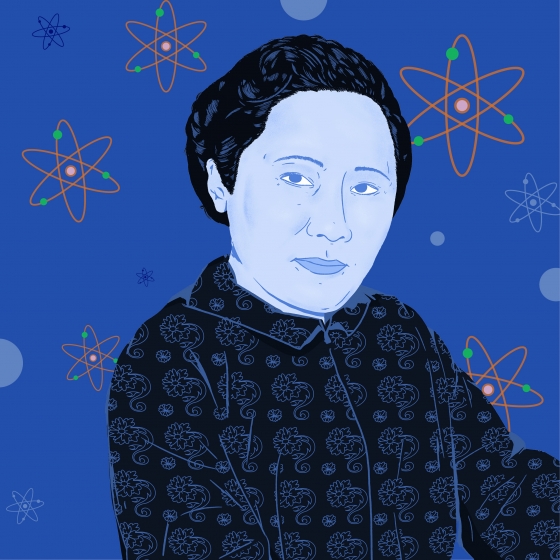 The first lady in physics.

Chien-Shiung Wu was a pioneering Chinese American experimental physicist. Through her ground-breaking experiments, she not only radically changed the way scientists viewed the fundamental laws of the universe, but also changed our notion of a modern-day scientist.

From a very young age, Wu’s father, Zhong-Yi Wu, instilled in her a strong belief in the power of education and equality for females. Born in a small village near Shanghai, China, in 1912, Wu went to an elementary school founded by her father that promoted education for girls at a time when it was still uncommon for girls to go to school.1 She went on to graduate top of her class at the National Central University in Nanking and was encouraged by her female mentor, Dr Jing-Wei Gu, to continue her education in the United States. In 1936, Wu moved to the US, where she earned a doctorate in physics at the University of California, Berkeley and became a world leader in experimental physics, particularly in the field of beta decay.2

Beta decay occurs when an unstable atomic nucleus decays into a lower energetic configuration, emitting high energy particles such as an electron in the process.3 In 1956, upon learning of her extraordinary expertise in the subject, fellow Chinese American physicists Tsung-Dao Lee and Chen Ning Yang approached Wu for help in devising an experiment that would test their theory that the law of conservation of parity didn’t hold during beta decay. Forgoing her Christmas holidays and a long-awaited trip back to China, Wu and her collaborators performed the experiment that sent shockwaves through the physics community. Using radioactive cobalt at temperatures near absolute zero to show that the electrons ejected from cobalt as it decayed were biased in one direction, confirming the hypothesis that parity isn’t conserved in weak nuclear reactions.4 This led to a Nobel Prize for both Lee and Yang, while Wu’s pivotal experimental work didn’t receive the same level of recognition. She spoke out about the discrimination faced by female scientists later in her career, pondering “whether tiny atoms and nuclei, or the mathematical symbols, or the DNA molecules have any preference for either masculine or feminine treatment” .5

In her later years, Chien-Shiung Wu became an advocate on various social issues such as equal opportunities in STEM education for males and females. Wu also continued to be an influential figure in the world of physics until her retirement in 1981. She became the first female president of the American Physical Society and the first person to win the prestigious Wolf prize in 1978. Her textbook, Beta Decay, published in 1965, remains the standard reference book for the subject.

In 1997 at the age of 85, Wu died following a stroke.6 Her ashes were buried in the courtyard of the school founded by her father, which inspired and led her to become one of the greats of physics.