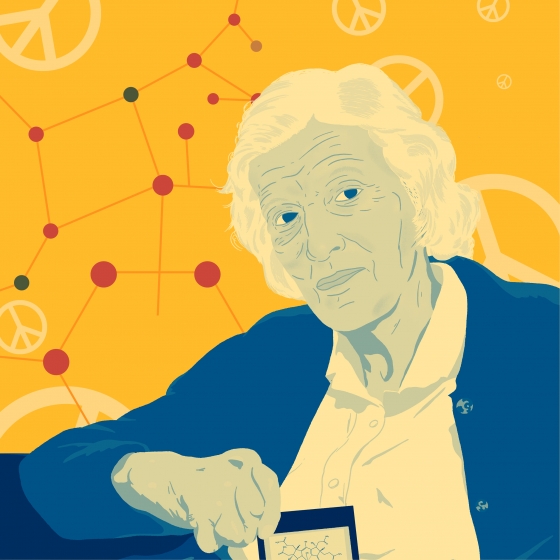 Captivated by chemistry and crystals.

Dorothy Mary Crowfoot Hodgkin was born in Cairo, Egypt, on 12 May 1920.1 Her parents were archaeologists - her father was an educational administrator and her mother a pioneer in the study of archaeological textiles and a botanist.2

Hodgkin spent most of her early years travelling between England and Egypt (and later Sudan), where her energetic and academic parents introduced her to a range of science subjects. In England, Hodgkin performed analyses on garden soil in an attic room of the family house using a chemistry set gifted to her by a family friend.3 During that time, she attended science classes run by the Parent’s National Educational Union. Their science syllabus extended beyond that taught by mainstream schools and included interesting practical work. In chemistry, Hodgkin and her classmates made solutions of alum and copper sulphate that eventually crystallised, sparking a lifelong interest in chemistry and crystals. In 1928, Hodgkin embarked on a degree in chemistry at Somerville College, Oxford, culminating in a research project investigating dimethyl thallium halides during her fourth year. She then obtained a PhD in the crystallographic investigation of steroid crystals, which ultimately defined her career.2

Hodgkin’s numerous achievements included the discovery of three-dimensional biomolecular structures such as cholesteryl iodide, penicillin and Vitamin 12 – the last of which was a ground-breaking feat for which she was awarded the Nobel Prize in Chemistry in 1964. She was the third woman to win the Nobel prize in Chemistry and the 13th woman to ever win the Nobel Prize. She was also awarded the Copley medal in 1976 in recognition of her achievements, making her the first and only female recipient as of 2020.4

Her most extraordinary research project was solving the structure of insulin, a project that began in 1935 after she was offered a sample of crystalline insulin in 1934. It took 34 years to complete, most of which was spent refining X-ray crystallography techniques for application to complex molecules such as insulin, until finally solving the structure of insulin with her team in 1969.2 Her work paved the way for mass-production – and eventually, widespread usage of insulin as a treatment for diabetes.5

At the age of 24, Hodgkin began experiencing pain in her hands and a visit to a doctor led to a diagnosis of rheumatoid arthritis, an autoimmune condition. An infection four years later triggered her first flare-up and her condition progressively worsened over time. Her hands deteriorated to the point where she could no longer use the main switch of the x-ray equipment required for her experiments. In response, she had a longer lever made for the switch. She also combated arthritis flare-ups with aspirin and heat treatment. During the three-day marathon that preceded solving insulin’s structure, Hodgkin wore slippers while she worked due to severe swelling in her ankles.6 Hodgkin also used a wheelchair in her final years. Despite her failing health, she remained scientifically active, adhering to a demanding schedule and travelling to Beijing in 1993.7

Hodgkin passed away on 29 July 1994. She was 74 and left behind an admirable legacy defined by innovation, tenacity, and a lifelong passion for science.