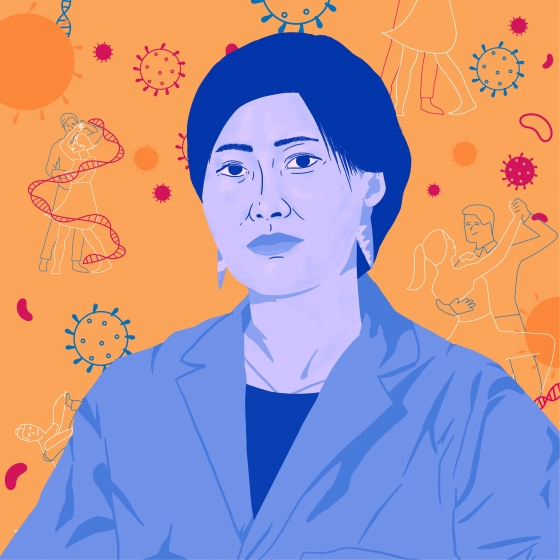 Force of nature in HIV & biology.

Born Wong Yee Ching in Guangzhou, China, on 27 August 1946, Flossie Wong-Staal was 18 when she anglicised her name in anticipation of her move to the United States for college.1 She wanted a distinct name. Her father suggested "Flossie" - after a typhoon that had recently hit the Pacific.2 So, she became "Flossie."

Wong-Staal spent her early years in Hong Kong, having fled China with her family in 1952 after the Communist revolution. In 1964, Wong was admitted to the University of California, Los Angeles (UCLA) to complete a bachelor's degree in bacteriology. In doing so, she became the first woman in her family to attend college. She went on to earn a doctorate in molecular biology in 1972.

In 1973, Wong-Staal joined the National Cancer Institute (NCI) to join the search for a human retrovirus - a virus that spreads infection by inserting a copy of its genetic material into the host's DNA. This search was controversial as most contemporaries had dismissed the plausibility of their existence.3 But in 1979, the team discovered the first human retrovirus4, HTLV-1, now known to cause some types of leukaemia.

Wong-Staal's research prowess didn't go unnoticed and by 1982, Wong-Staal was appointed chief of the Section of Molecular Genetics of Hematopoietic Cells. Her appointment followed the beginning of the HIV/AIDS epidemic, which emerged in 1981 and she was dedicated to investigating this new disease.

As the death toll rose, so did the pressure to treat this new virus. Wong-Staal's team were the first to confirm that HIV caused AIDS and, in 1985, the first to clone HIV.5 This discovery prompted defining research into the detection and treatment of HIV/AIDS. Wong-Staal continued in her research and discovered molecular evidence that allowed others to create treatments to manage HIV and blood tests that easily detect HIV.

In 1990, Wong-Staal left the NCI to establish the Centre for AIDS Research at the University of California, San Diego (UCSD), where she pioneered gene therapy as a treatment for viruses. This was critical to the formation of current HIV treatment methods.6

In 2002, she left academia but continued to dedicate her life to the treatment of diseases as Chief Scientific Officer at a biopharmaceutical company she co-founded, Immusol. There, she focussed on improving treatments for Hepatitis C.

Dr Wong-Staal received many awards for her work. She was named "the top woman scientist of the 1980s" by the Institute for Scientific Information and was inducted into the United States' National Women's Hall of Fame in 2019. She passed away at the age of 73 on 8 July 2020.