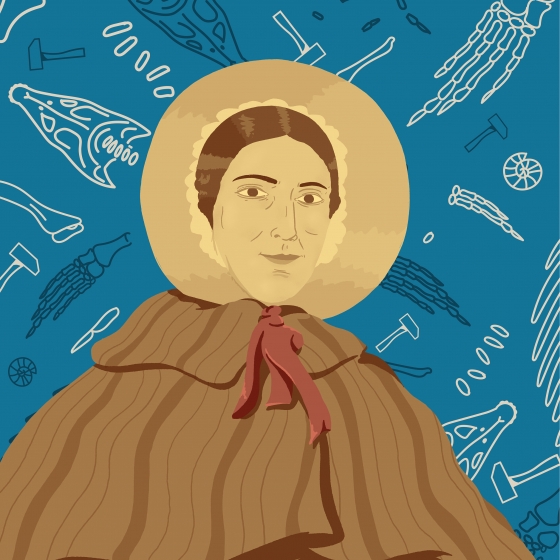 An unlikely contributor at the founding of palaeontology.

Mary Anning was born into a working-class family in Dorset, England, on 21 May 1799. She was the third of ten children and only one of two to survive to maturity.1 Anning’s father, Richard Anning, was a cabinetmaker who collected fossils along with Lyme Regis in an area now known as the ‘Jurassic Coast’.2 Fossil collecting was a family hobby and business – Anning and her brother would often accompany their father and learnt to find and clean fossils. The family ran a shop where they would sell the fossils to supplement their income. In 1810, when Anning was around 10 or 11, her father died unexpectedly, leaving the family in poverty.3 To support the family, Anning’s brother, then 14, worked as an upholsterer while Anning and their mother continued to collect and sell fossils.4

Anning was meticulous in documenting and recording her finds. In 1810, Anning’s brother found a fossilised crocodilian skull and a 12-year-old Anning then revealed the rest of the skeleton. Years later, the skeleton would be identified as a new species – the ichthyosaur. Despite Anning’s obvious scientific flair, in the early 19th century, the English working class were excluded from quality schooling.5 However, the church that Anning’s family attended was among the English Dissenters and believed in educating the poor, contrary to the teachings of the Church of England.6 Anning was taught to read and write at Sunday school. Furthermore, women were prohibited from attending University. Anning overcame the knowledge barriers of classism and sexism by borrowing scientific literature and hand copying it to study at home. She would also dissect fish and reptiles to supplement her knowledge. She developed a knowledge of geology and anatomy that was later described as superseding established scientists in the field.7

Anning became well known among the geological community. Anning’s self-taught scientific knowledge enabled her to do more than merely sell fossils to collectors. She found, cleaned, prepared, documented and even classified them. Established collectors and geologists would purchase the fossils and discuss Anning’s research. As was commonplace in 19th century England, it was the wealthy collectors and geologists who would publish scientific papers on the finds, often without crediting the working-class people responsible for them.4 Anning’s discoveries contributed to the acceptance of George Cuvier’s Theory of Extinction which claimed that species could become extinct – an idea that faced strong opposition from the Church of England.8 Furthermore, it was Anning who first identified that small rocks often found near fossils were fossilised faeces, later coined as coprolites.4

At the age of 47, Mary Anning died of cancer. Despite being a key figure in the founding of palaeontology, Anning is credited with authorship of a single publication – a letter written to E. Charlesworth, editor of The Magazine of Natural History in 1839.9 Charlesworth published an excerpt from the letter, where Anning refuted an inaccurate conclusion posited about one of her discoveries. The letter displays her powerful scientific knowledge and ability, and the publication of the letter shows the degree of respect Anning earned from the scientific community, despite being excluded from it.