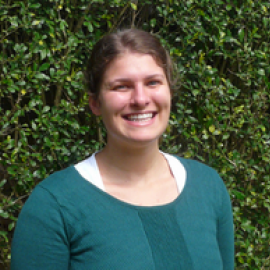 In high school, my favourite subject by far was Chemistry.

I especially enjoyed learning about biomass and biofuels, and I thought it would be fascinating to have a career in renewable energy at a time when there was so much emphasis on finding alternatives to fossil fuels.

One of the really great things about the course is the class dynamics.  In second and third year there are a number of courses that are only offered to Industrial Chemists, so there are only 10-15 people in each class. Having such a small class is not only a great learning environment, but has also created a tight-knit community between my classmates and lecturers. Outside of these Industrial Chemistry subjects, most of the classes are integrated with Chemical Engineering and a few with the School of Chemistry, so I have made great friends with students from all three programs.

I am often asked about the job prospects for Industrial Chemistry students as there are so few graduates each year and many people have never heard of the course. There is actually a large range of job prospects available to Industrial Chemistry graduates. The school is fantastic and really looks after us. It has developed links with a number of companies that employ Industrial Chemists, both as Vacation Students and as Graduates, so I often get emails about job opportunities that are targeted directly to students in my small cohort. I think that companies see the value in employing individuals who bridge the gap between a Chemical Engineer and a Chemist.  Amongst my friends who have graduated, about half have gone into Chemical Engineering roles and the other half are employed in lab based positions in a wide variety of industries.

Every year there is a 'Women in Engineering' afternoon tea organised by the school, where three or four female graduates come and share their experiences. It is always fascinating to find out about the large breadth of careers that graduates can enter into and to hear about what they love about their job.  At this year’s event, I was introduced to one of the graduates and began talking to her about her role in the renewables division in a consulting firm; this sounded like a career I would be really interested in, and so I kept in contact with the graduate and as a result I have now secured a job working one day a week at this firm. It has been such a fantastic experience so far, and its really interesting seeing how to apply what I am learning in class to real-world problems.

I recommend that new students find an area of uni-life they want to get involved in as soon as uni starts! It was pretty daunting transitioning from small, structured classes in high school to my first class which had over 300 people in it, but one of the best things I did was get involved in the Chemical Engineering and Industrial Chemistry societies. It provided a base for me, and was great to make friends with students from older years that were able to give me advice about subjects and surviving uni in general.